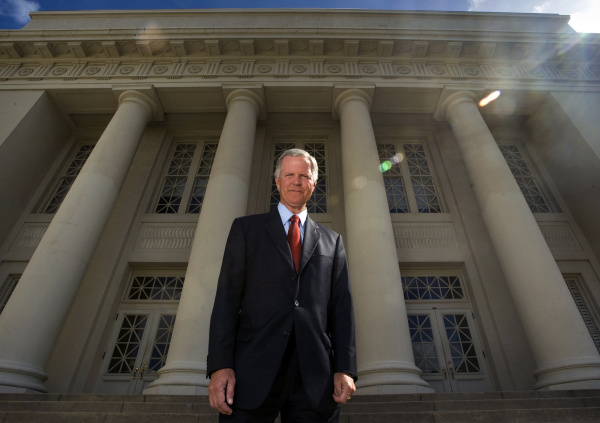 Dr. Thomas Campbell, Dean, Chapman Law School and Former U.S Congressman, will speak on the war powers of the US President and the efforts he’s made to define the limits of the President’s power to involve the country in wars without the consent of Congress.

Complimentary Self Parking or $18 for Valet

Dr. Tom Campbell was appointed Dean of the Fowler School of Law in February, 2011. He came to Chapman in January 2009 as a visiting Presidential Fellow and Fletcher Jones Distinguished Visiting Professor of Law. Prior to joining Chapman, he was the Bank of America Dean and Professor of Business from 2002 to 2008 at the Haas School of Business at the University of California, Berkeley. Dr. Campbell was a Professor of Law at Stanford University from 1987-2002; Associate Professor at Stanford, 1983-1987; a member of the United States Congress from 1989-1993 and 1995-2001; a member of the California State Senate from 1993-1995; and the director of the California Department of Finance from 2004-2005. He has a B.A., M.A., and Ph.D. in economics from the University of Chicago, and a JD, magna cum laude, from Harvard Law School, where he also served as a member of the board of editors of the Harvard Law Review. He was a law clerk to United States Supreme Court Justice Byron White, and to US Court of Appeals Judge George E. MacKinnon; a White House Fellow; executive assistant to the Deputy Attorney General, Department of Justice; and, director of the Bureau of Competition at the Federal Trade Commission.

Dr. Campbell’s principal area of academic work is in the application of economics to legal questions. He has published articles in the Harvard Law Review, the Columbia Law Review, the Stanford Law Review, the UCLA Law Review, the Texas Law Review, the Hastings Law Journal, and the Antitrust Law Journal, among others. He is the author of the book Separation of Powers in Practice, published by Stanford University Press(2004). Since 2001, Dr. Campbell and his wife Susanne have taught in Africa as volunteers on seven separate occasions, in Ghana, Eritrea and Rwanda, where they taught courses in fund raising (Susanne) and international financial institutions, business strategy and constitutional law (Tom), at the following universities: Ashesi University, Accra, Ghana; Kigali Institute of Science and Technology, Kigali, Rwanda; School of Banking and Finance, Kigali, Rwanda; and the University of Asmara, Asmara, Eritrea.

Your ticket for the: War Powers of U.S. Presidents