Engaging the public to better understand the world

Meet and learn from the people who shape our world

As a World Affairs Council member, you join a diverse group of individuals who are passionate about expanding international awareness. Members participate in world class events featuring speakers who provide the stories behind the headlines as well as special receptions and gatherings.

As a member you will have the opportunity to build relationships with other liked minded individuals and professionals that in the local international affairs community. Your membership is valuable in supporting World Affairs Council programming and student outreach in the community. 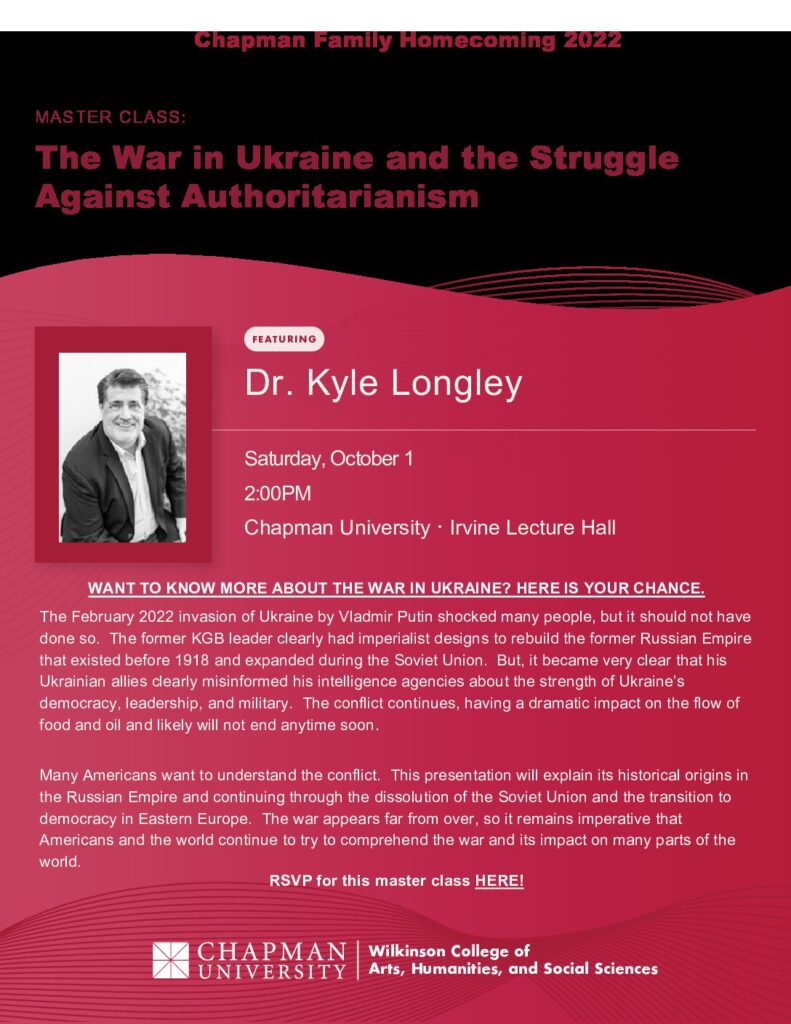 Master Class: The War in Ukraine and the Struggle Against Authoritarianism

Master Class: The War in Ukraine and the Struggle Against Authoritarianism Hosted by Chapman University Chapman Family Homecoming Saturday, October 1, 2022 | 2:00 pm   For sold-out events, standby lines will be available and guests will be admitted based on capacity. Be sure to visit the Chapman Family Homecoming Hub for complete Homecoming Weekend details and more! Please visit CU Staying Healthy for the latest COVID-19 protocols for Chapman visitors. Register your vehicle for free event parking. Live Stream Tickets available.   Register to see our own Programs Co-Chair, Dr. Kyle Longley, present on the war in Ukraine and its overall impact on global political structures! The February 2022 invasion of Ukraine by Vladmir Putin shocked many people, but it should not have done so. The former KGB leader clearly had imperialist designs to rebuild the former Russian Empire that existed before 1918 and expanded during the Soviet Union. But, it became very clear that his Ukrainian allies clearly misinformed his intelligence agencies about the strength of Ukraine’s democracy, leadership, and military. The conflict continues, having a dramatic impact on the flow of food and oil and likely will not end anytime soon. Many Americans want to understand the conflict. This presentation will explain its historical origins in the Russian Empire and continuing through the dissolution of the Soviet Union and the transition to democracy in Eastern Europe. The war appears far from over, so it remains imperative that Americans and the world continue to try to comprehend the war and its impact on many parts of the world. 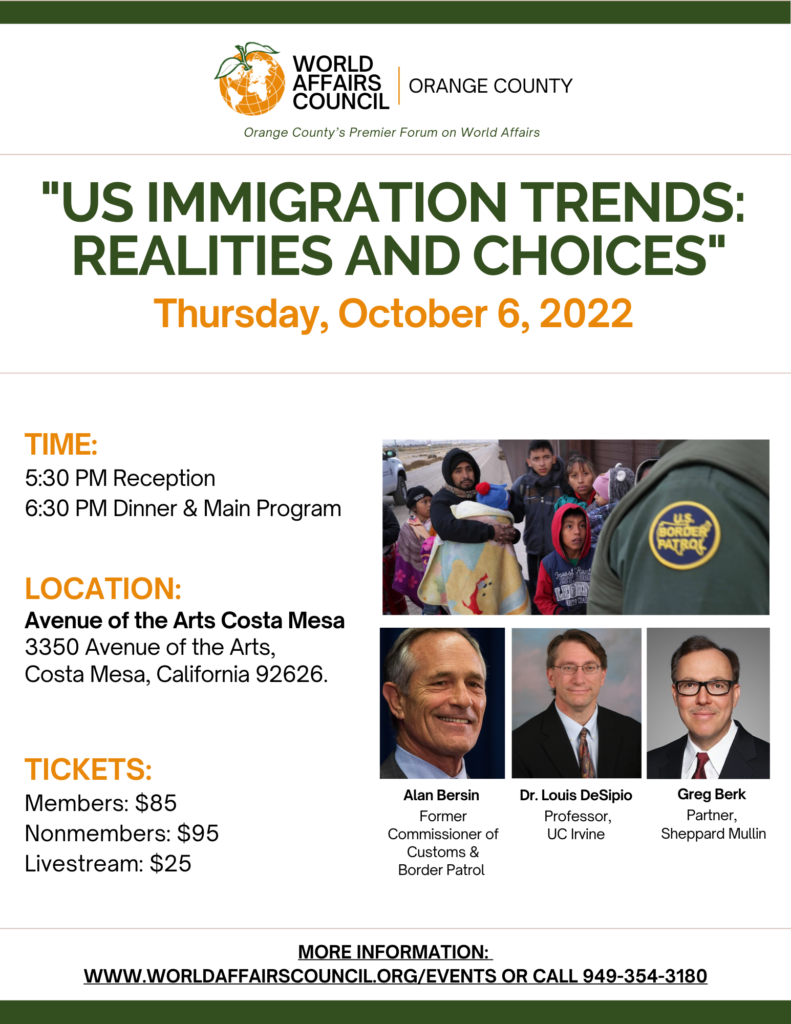 The World Affairs Council of Orange County presents: “US Immigration Trends: Realities and Choices” with Alan Bersin (Former Commisioner of Customs & Border Patrol), Dr. Louis Desipio (UC Irvine Professor), & Greg Berk (Partner, Sheppard Mullin) In-Person Event Date & Time: Thursday, October 6, 2022 5:30 PM Reception 6:30 PM Dinner & Main Program Location: Avenue of the Arts Costa Mesa 3350 Avenue of the Arts, Costa Mesa, California 92626. Tickets: Members: $85 Nonmembers: $95 Livestream: $25     Panelist Biographies: Alan Bersin is Executive Chairman of Altana AI, a new company that has developed a shared artificial intelligence model of global supply chains to assist governments and the private sector to assess risk across borders and international trade and commerce. He serves also as Executive Chairman of New Macro Risks, a strategic advisory firm specializing in non-state risks attendant to Border Management, including transnational organized crime and terrorism, cybersecurity, contraband, cargo smuggling, irregular migration, and contagious disease.  Bersin is the Inaugural Senior Fellow in the Homeland Security Project at the Belfer Center, Harvard Kennedy School of Government; and the Inaugural North America Fellow at the Woodrow Wilson Center for International Scholars (Canada and Mexico Institutes). Bersin was appointed by President Obama as U.S. Commissioner of Customs and Border Protection (2010-2011) and served at various times as Assistant Secretary for Policy & International Affairs and Chief Diplomatic Officer for the U.S. Department of Homeland Security (2012-2017).           Louis DeSipio, Ph.D., is Professor of Political Science and Chicano/Latino Studies at the University of California, Irvine. He is the author of Counting on the Latino Vote:  Latinos as a New Electorate (the University Press of Virginia), U.S. Immigration in the Twenty-First Century: Making Americans, Remaking America (co-authored with Rodolfo de la Garza, Westview Press), and Uneven Roads: An Introduction to U.S. Race and Ethnic Politics (co-authored with Todd Shaw, Dianne Pinderhughes, and Toni-Michelle Travis, Sage/Congressional Quarterly Press).  He received his Ph.D. in Government from the University of Texas at Austin, where he also received an MA in Latin American Studies, and his BA from Columbia University.  He is past-President of the Western Political Science Association.                  Greg Berk is a partner in the firm’s Labor and Employment Practice Group. He leads the Firm’s immigration practice and is based in Orange County, California. He is a Certified Specialist in Immigration and Nationality Law by the State Bar of California Board of Legal Specialization. He is the author of Immigration Checklists and Practice Pointers – A  Desk Reference book published by the American Bar Association for General Counsel and HR managers. He has over 20 years of experience advising on all aspects of U.S. immigration matters. He assists employers worldwide with the hiring and retention of foreign national executives and highly talented individuals that are needed in their U.S. workforce. He also works with investors on E-2, L-1, and EB-5 matters. He also handles I-9 and other immigration compliance matters. 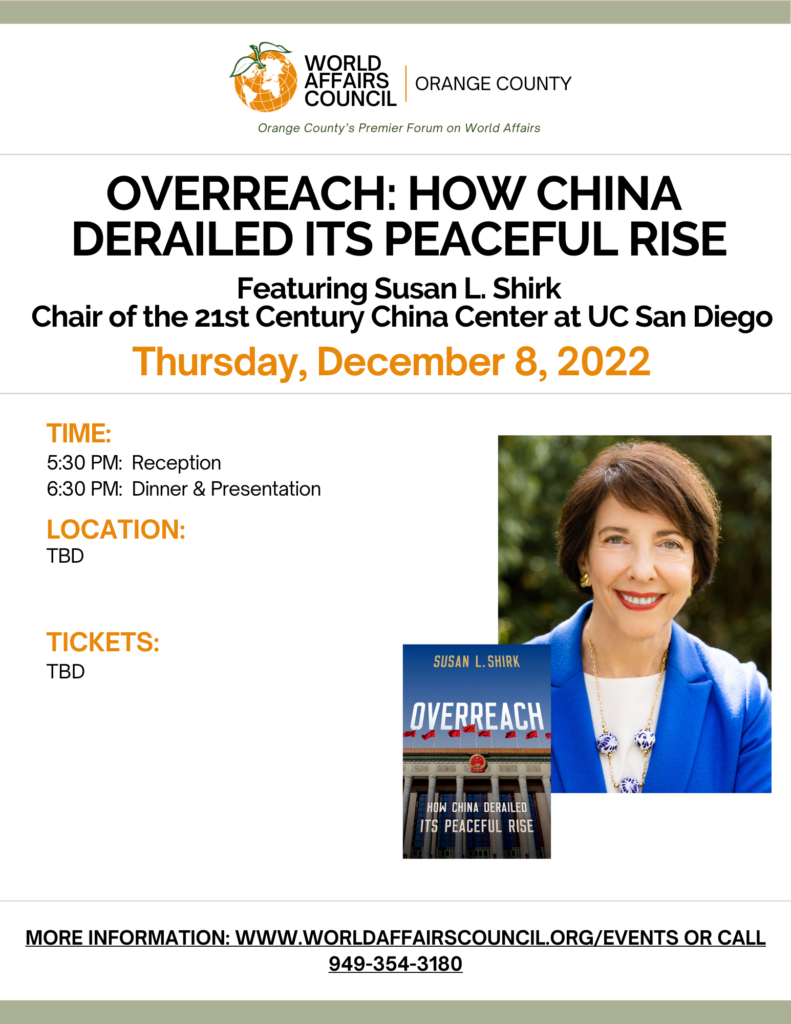 The World Affairs Council of Orange County presents: “Overreach: How China Derailed Its Peaceful Rise” Featuring Susan L. Shirk, Chair of the 21st Century China Center at UC San Diego In-Person Event Date & Time: Thursday, December 8th, 2022 5:30 PM Reception 6:30 PM Dinner & Main Program 8:30 PM Book Signing Location: TBA Tickets: TBA Speaker Bio: Susan Shirk is a Research Professor and Chair of the 21st Century China Center at the School of Global Policy and Strategy, UC San Diego. Shirk is the author of China: Fragile Superpower, and The Political Logic of Economic Reform in China. From 1997-2000, she served as Deputy Assistant Secretary of State in the Bureau of East Asia and Pacific Affairs, with responsibility for China, Taiwan, Hong Kong and Mongolia. — Description of “Overreach: How China Derailed Its Peaceful Rise.” Copies available for purchase at the event: For decades, China’s rise to power was characterized by its reassurance that this rise would be peaceful. Then, as Susan L. Shirk, shows in this sobering, clear-eyed account of China today, something changed. For three decades after Mao’s death in 1976, China’s leaders adopted a restrained approach to foreign policy. They determined that any threat to their power, and that of the Chinese Communist Party, came not from abroad but from within—a conclusion cemented by the 1989 Tiananmen crisis. To facilitate the country’s inexorable economic ascendence, and to prevent a backlash, they reassured the outside world of China’s peaceful intentions. Then, as Susan Shirk shows in this illuminating, disturbing, and utterly persuasive new book, something changed. China went from fragile superpower to global heavyweight, threatening Taiwan as well as its neighbors in the South China Sea, tightening its grip on Hong Kong, and openly challenging the United States for preeminence not just economically and technologically but militarily. China began to overreach. Combining her decades of research and experience, Shirk, one of the world’s most respected experts on Chinese politics, argues that we are now fully embroiled in a new cold war. To explain what happened, Shirk pries open the “black box” of China’s political system and looks at what derailed its peaceful rise. As she shows, the shift toward confrontation began in the mid-2000s under the mild-mannered Hu Jintao, first among equals in a collective leadership. As China’s economy boomed, especially after the Global Financial Crisis of 2008, Hu and the other leaders lost restraint, abetting aggression toward the outside world and unchecked domestic social control. When Xi Jinping took power in 2012, he capitalized on widespread official corruption and open splits in the leadership to make the case for more concentrated power at the top. In the decade following, and to the present day—the eve of the 20th CCP Congress when he intends to claim a third term—he has accumulated greater power than any leader since Mao. Those who implement Xi’s directives compete to outdo one another, provoking an even greater global backlash and stoking jingoism within China on a scale not seen since the Cultural Revolution. Here is a devastatingly lucid portrait of China today. Shirk’s extensive interviews and meticulous analysis reveal the dynamics driving overreach. […]

Thank you to our Supporting Partners

Join the WAC of Orange County

The World Affairs Councils of America was founded in 1918.

It is the largest nonprofit international affairs organization in the United States.

We are part of the World Affairs Councils of America, a nonprofit and nonpartisan national organization based in Washington, DC. See what’s happening around America.

Your ticket for the: Home