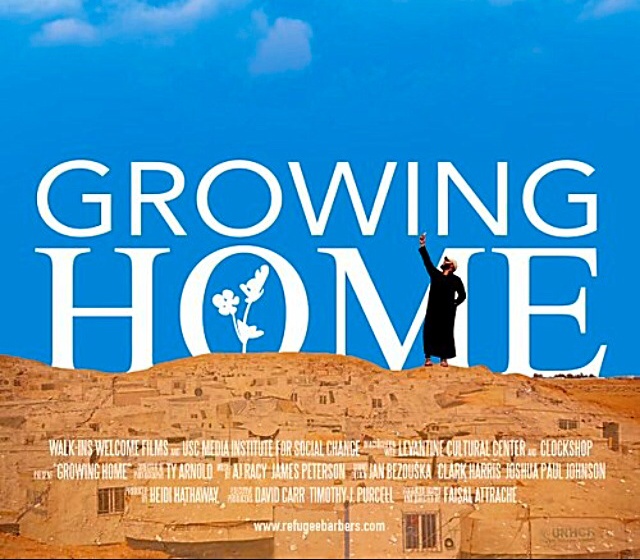 The film, “Growing Home” takes place amid Syria’s refugee crisis that has displaced nine million people; a Syrian barber struggles to maintain normality in the Zaatari refugee camp. Following the film will be a panel discussion with the film’s director, Faisal Attrache and panelists.

is a Syrian-American filmmaker born in Syria and raised in the San Francisco Bay Area. He attended UCLA where he received BAs in International Development Studies and Environmental Studies. While at UCLA he fell in love with film and added a Film and TV minor to his studies, set on making it his career.  After graduating, Faisal spent a year living in Syria where he made his first short film and studied Arabic. Faisal attended the University of Southern California’s (USC) prestigious School of Cinematic Arts where he received an MFA in Film and Television Production in 2014.  Faisal is a writer/director who strives to tell unique stories across many genres, with a powerful, socially conscious message.

is the CEO of Isra Couture. She is the Chairwoman of the Syrian Institute for Progress (SIP), an organization that focuses on addressing and supporting the needs of Syrian refugees. She provides information and advice on the dynamic changes of the Syrian revolution and the opposition in order to help find the most suitable and lasting solution to the crisis. Souzan has been an activist from the beginning of the Syrian revolution. She established and was the president for the Syrian American Council, Los Angeles chapter, (2011-2012) She had worked hard in sending humanitarian aid to the Syrian Refugees and she was able to send 6 of 40-foot containers filled with baby milk, blankets, sleeping bags, and winter jackets for the Children at the camps. Currently she has been working with the Shriner hospital to bring burnt Syrian children to be treated in the US.

is the founder of For The Unseen, which is a non-profit organization that is currently helping Syrian Refugees. The overall mission of For The Unseen, is to improve the quality of life of those around the globe who are impacted by illness, poverty and/or societal conflicts by providing sustainable solutions to alleviate human suffering.

Puneh is a product of immigrant parents, who was raised with the belief that “Mankind is One” and service is a key factor in one’s contribution to this life. In 2013, her organization helped open a Syrian refugee school in Lebanon that originally had 350 children, and now it has over 1,000 children. She has traveled into Syria four different times to provide immediate aid to the refugees in the worst conditions. She fund raised money before each trip, and 100% of the donations were used to buy food in bulk, hospital supplies and toys for the children.

Taymor’s outside activities include prior host of US-based satellite TV station that broadcasts worldwide. The “Professionals Network Show” was aimed at the younger generation of Afghans. Previously, Taymor served as advisor to the Minister of Finance of Afghanistan (current President), where he played a leading role in the creation and implementation of a computerized reporting system for that country’s Treasury. He trained and supervised employees of eight provinces on methods of data collection, analysis, budget principles, statistics, and familiarity with the Ministry of Finance basic revenue and expenditure structures.  Taymor is  currently on the Executive Board and a Trustee of the World Affairs Council of Orange County.