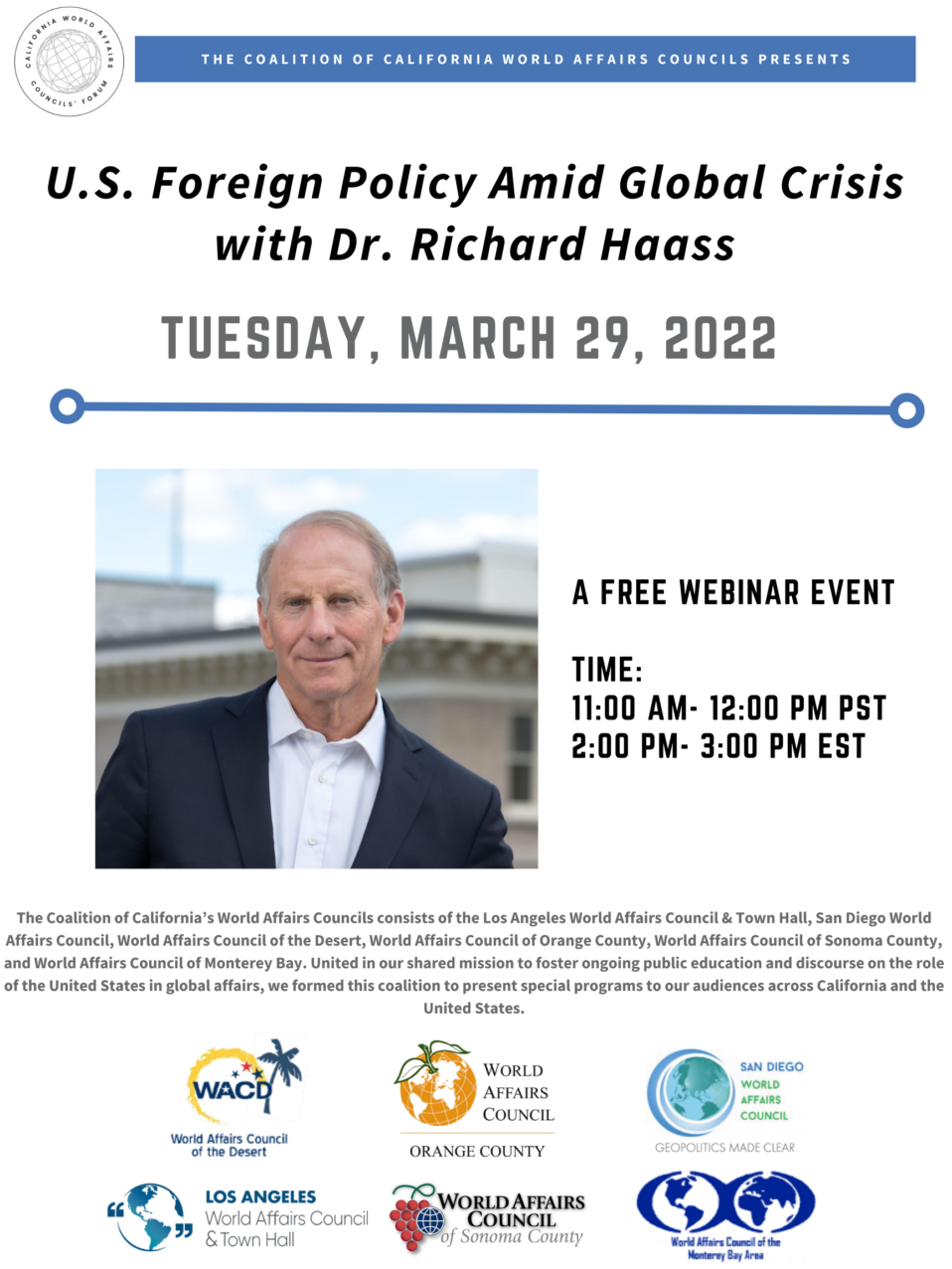 A Forum on the United States’ Role as an International Actor in 2022, hosted by the Coalition of California World Affairs Councils

Our current moment is defined by overlapping international crises. We are in year three of a global pandemic that has decimated communities across the world. There is an alarming trend of growing humanitarian emergencies: food shortages, refugee displacement, and political instability. Tensions have been rising between global superpowers and longstanding alliances are being reshaped in real-time. This February, Russia invaded the sovereign nation of Ukraine bringing war back to Europe for the first time since World War Two.

The world is changing fast. As these global conflicts shift and overlap, the United States’ response is complicated and fraught with challenges. But the stakes are higher than ever.

To address these challenging questions about the future of the United States’ role in the world, the Coalition of California’s World Affairs Councils presents our forum assessing U.S. Foreign Policy Amid Global Crisis, featuring keynote speaker Dr. Richard Haass, President of the Council on Foreign Relations and moderated by Colonel Richard Downie.

Dr. Richard Haass is a veteran diplomat, a prominent voice on American foreign policy, and an established leader of nonprofit institutions. He is in his nineteenth year as president of the Council on Foreign Relations, an independent, nonpartisan membership organization, think tank, publisher, and educational institution dedicated to being a resource to help people better understand the world and the foreign policy choices facing the United States and other countries.

In 2013, he served as the chair of the multiparty negotiations in Northern Ireland that provided the foundation for the 2014 Stormont House Agreement. For his efforts to promote peace and conflict resolution, he received the 2013 Tipperary International Peace Award.

From January 2001 to June 2003, Dr. Haass was director of policy planning for the Department of State, where he directed the policy planning staff and was a principal advisor to Secretary of State Colin Powell. Confirmed by the U.S. Senate to hold the rank of ambassador, Dr. Haass also served as U.S. coordinator for policy toward the future of Afghanistan and U.S. envoy to the Northern Ireland peace process.

Dr. Haass has extensive additional government experience. From 1989 to 1993, he was special assistant to President George H.W. Bush and senior director for Near East and South Asian affairs on the staff of the National Security Council. In 1991, Dr. Haass was awarded the Presidential Citizens Medal for his contributions to the development and articulation of U.S. policy during Operations Desert Shield and Desert Storm. Previously, he served in the Departments of State (1981–1985) and Defense (1979–1980), and was a legislative aide in the U.S. Senate.

A Rhodes Scholar, Dr. Haass holds a bachelor’s degree from Oberlin College and master’s and doctorate of philosophy degrees from Oxford University. He has also received numerous honorary degrees and was a member of the faculty of Harvard University’s Kennedy School of Government and Hamilton College.

Dr. Haass is the author or editor of fourteen books on American foreign policy and one book on management. His latest book is The World: A Brief Introduction, published by Penguin Press.

Your ticket for the: U.S. Foreign Policy Amid Global Crisis with Dr. Richard Haass