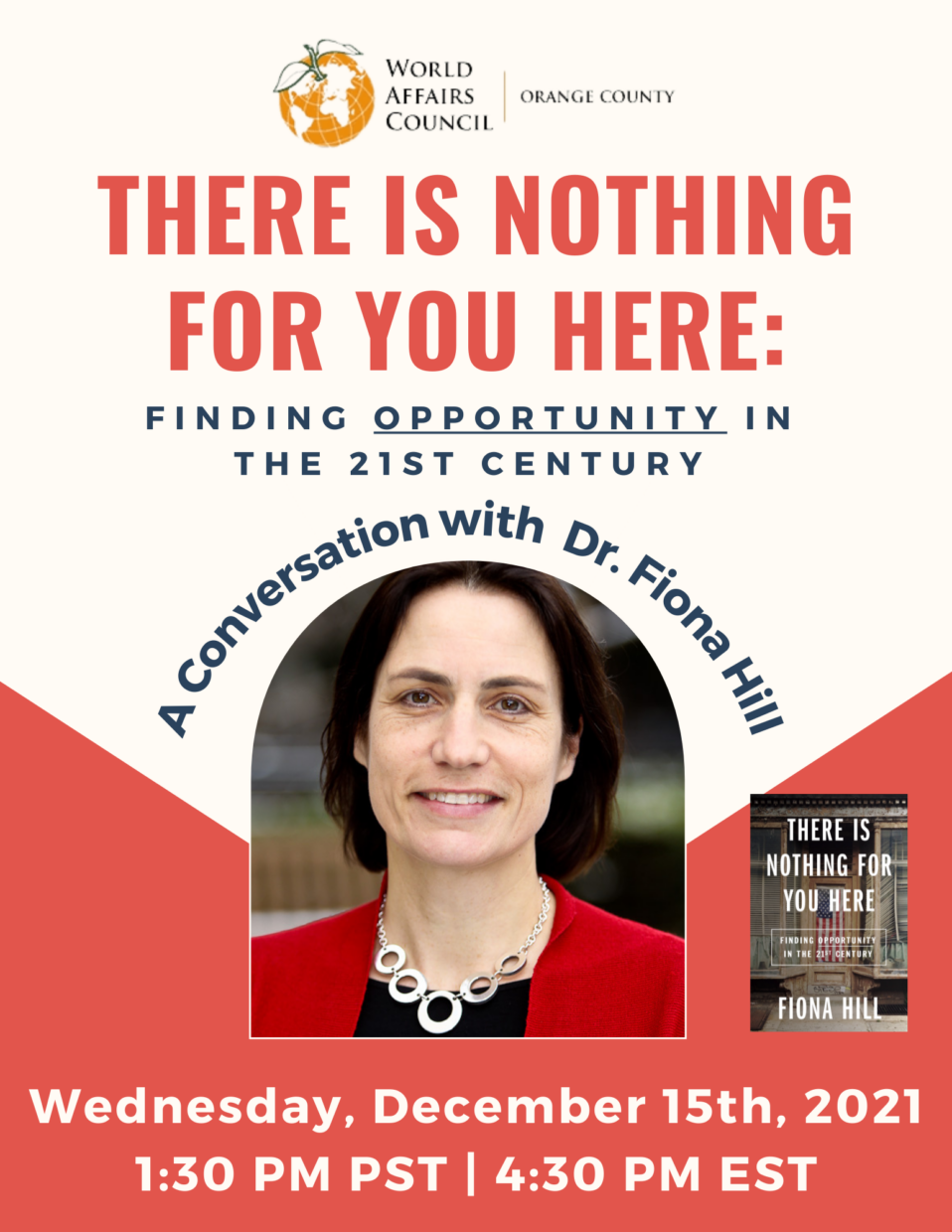 “There Is Nothing for You Here: Finding Opportunity in the 21st Century”: A Conversation with Dr. Fiona Hill

Senior Fellow at the Brookings Institution

Author of New Book, “There’s Nothing For You Here”

Fiona Hill grew up in a world of terminal decay. The last of the local mines had closed, businesses were shuttering, and despair was etched in the faces around her. Her father urged her to get out of their blighted corner of northern England: “There is nothing for you here, pet,” he said.

The coal-miner’s daughter managed to go further than he ever could have dreamed. She studied in Moscow and at Harvard, became an American citizen, and served three U.S. Presidents. But in the heartlands of both Russia and the United States, she saw troubling reflections of her hometown and similar populist impulses. By the time she offered her brave testimony in the first impeachment inquiry of President Trump, Hill knew that the desperation of forgotten people was driving American politics over the brink—and that we were running out of time to save ourselves from Russia’s fate. In this powerful, deeply personal account, she shares what she has learned, and shows why expanding opportunity is the only long-term hope for our democracy.

Speaker Biography:
Fiona Hill is the Robert Bosch senior fellow in the Center on the United States and Europe in the Foreign Policy program at Brookings. She recently served as deputy assistant to the president and senior director for European and Russian affairs on the National Security Council from 2017 to 2019. From 2006 to 2009, she served as national intelligence officer for Russia and Eurasia at The National Intelligence Council. She is co-author of “Mr. Putin: Operative in the Kremlin” (Brookings Institution Press, 2015).

Prior to joining Brookings, Hill was director of strategic planning at The Eurasia Foundation in Washington, D.C. From 1991 to 1999, she held a number of positions directing technical assistance and research projects at Harvard University’s John F. Kennedy School of Government, including associate director of the Strengthening Democratic Institutions Project, director of the Project on Ethnic Conflict in the Former Soviet Union, and coordinator of the Trilateral Study on Japanese-Russian-U.S. Relations.

Hill has researched and published extensively on issues related to Russia, the Caucasus, Central Asia, regional conflicts, energy, and strategic issues. Her book with Brookings Senior Fellow Clifford Gaddy,“The Siberian Curse: How Communist Planners Left Russia Out in the Cold,” was published by Brookings Institution Press in December 2003, and her monograph, “Energy Empire: Oil, Gas and Russia’s Revival,” was published by the London Foreign Policy Centre in 2004. The first edition of “Mr. Putin: Operative in the Kremlin” was published by Brookings Institution Press in December 2013, also with Clifford Gaddy.

Register for Event: “There Is Nothing for You Here: Finding Opportunity in the 21st Century” A Conversation with Dr. Fiona Hill

Your ticket for the: “There Is Nothing for You Here: Finding Opportunity in the 21st Century” A Conversation with Dr. Fiona Hill