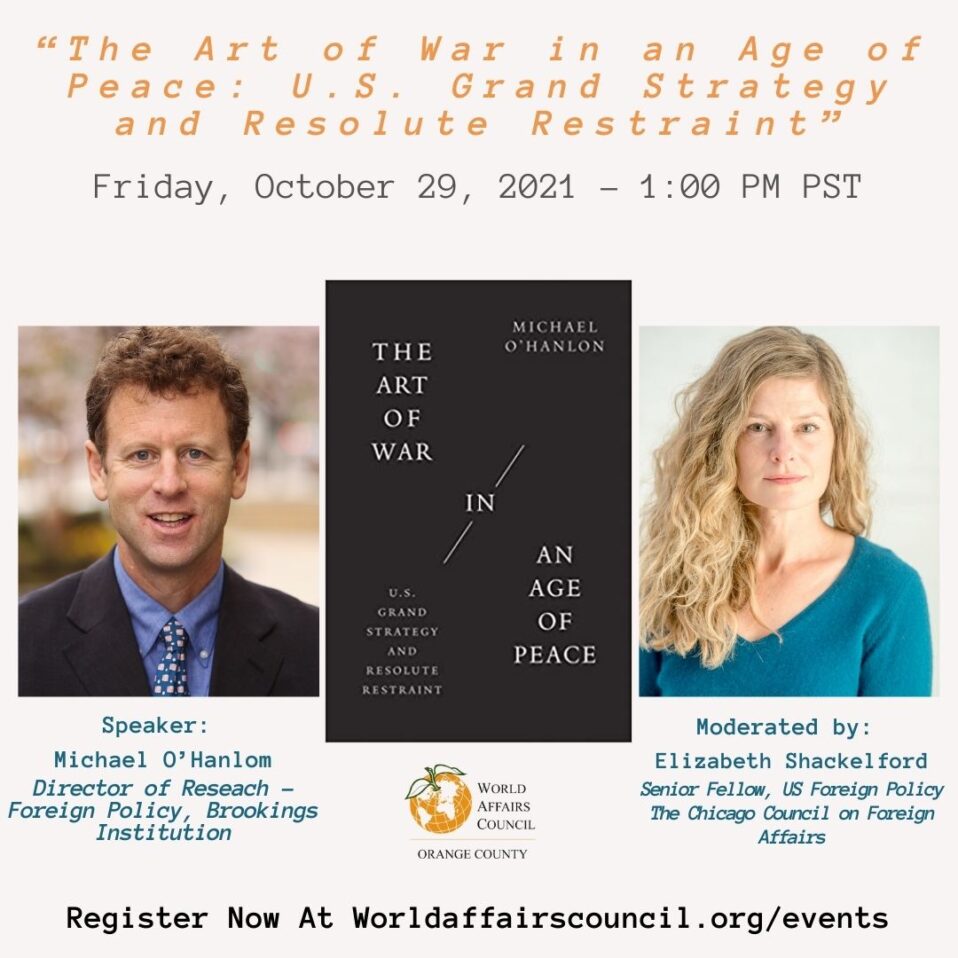 Michael O’Hanlon is a senior fellow, and director of research, in Foreign Policy at the Brookings Institution, where he specializes in U.S. defense strategy, the use of military force, and American national security policy. He
co-directs the Center for Security, Strategy, and Technology; the Defense Industrial Base working group; and the Africa Security Initiative within the Foreign Policy program, as well. He is an adjunct professor at Columbia and
Georgetown universities, a professional lecturer at George Washington University, and a member of the International Institute for Strategic Studies. O’Hanlon was also a member of the external advisory board at the Central Intelligence Agency from 2011-12.

O’Hanlon has written several hundred op-eds in newspapers including The Washington Post, The New York Times, The Los Angeles Times, The Washington Times, The Financial Times, The Wall Street Journal, The Japan Times, USA Today, and Pakistan’s Dawn paper.  His articles have appeared in Foreign Affairs, The National Interest, Survival, Washington Quarterly, Joint Forces Quarterly, and International Security, among other publications.
O’Hanlon has appeared on television or spoken on the radio some 4,000 times since September 11, 2001. In 2021, O’Hanlon was named one of Washingtonian’s “Most Influential People” in national security and defense.

O’Hanlon was an analyst at the Congressional Budget Office from 1989 to 1994. He also worked previously at the Institute for Defense Analyses. His doctorate from Princeton is in public and international affairs; his bachelor’s and master’s degrees, also from Princeton, are in the physical sciences. He served as a Peace Corps volunteer in Congo/Kinshasa (the former Zaire) from 1982-84, where he taught college and high school physics in French. Earlier, he worked on a dairy farm in Upstate New York, where he grew up, and attempted (unsuccessfully) with a team of Princeton experimental physicists in the “Gravity Group” to disprove Einstein’s General Theory of Relativity.

If you wish to purchase Michael O’Hanlon’s book, “The Art of War in an Age of Peace: U.S. Grand Strategy and Resolute Restraint,” it is available for purchase here: https://www.amazon.com/Art-War-Age-Peace-Restraint/dp/0300256779

Elizabeth Shackelford joined the Chicago Council on Global Affairs in January 2021 as senior fellow on US foreign policy. Her analysis, writing, and outreach focus on building awareness and understanding of a “restraint” approach to foreign policy, which seeks to limit the use of military force to the defense of core US national security interests and favors robust diplomatic engagement. Shackelford was a career diplomat with the US Department of State until December 2017, when she resigned in protest of the Trump administration. Her resignation letter was the first to draw widespread attention to the declining state of diplomacy under Donald Trump. She is the author of The Dissent Channel: American Diplomacy in a Dishonest Age, winner of the 2020 Douglas Dillon Book Award. Using both firsthand and historical observations, The Dissent Channel demonstrates that the crisis in US foreign policy predated recent efforts to sideline the diplomatic corps.

As a Foreign Service Officer, Shackelford served in Somalia, Kenya, South Sudan, Poland, and Washington, D.C., tracking political and conflict developments, advising Mission and Washington leadership, and
advocating for US interests with foreign counterparts. For her work in South Sudan during the outbreak of civil war in 2013, Shackelford received the Barbara Watson Award for Consular Excellence, the Department’s
highest honor for consular work.

As a non-resident fellow with the Quincy Institute for Responsible Statecraft in 2020, Shackelford conducted research, analysis, and commentary on the costs of a militarized approach to foreign policy and the need for
greater accountability in US actions abroad. Prior to joining the State Department, Shackelford was an associate with Booz Allen Hamilton where she led USAID projects to assess business environments in developing
countries. Shackelford was also an associate with the law firm Covington &amp; Burling, where she focused on international trade law.

Register for Event: The Art of War in an Age of Peace: U.S. Grand Strategy and Resolute Restraint

Your ticket for the: The Art of War in an Age of Peace: U.S. Grand Strategy and Resolute Restraint