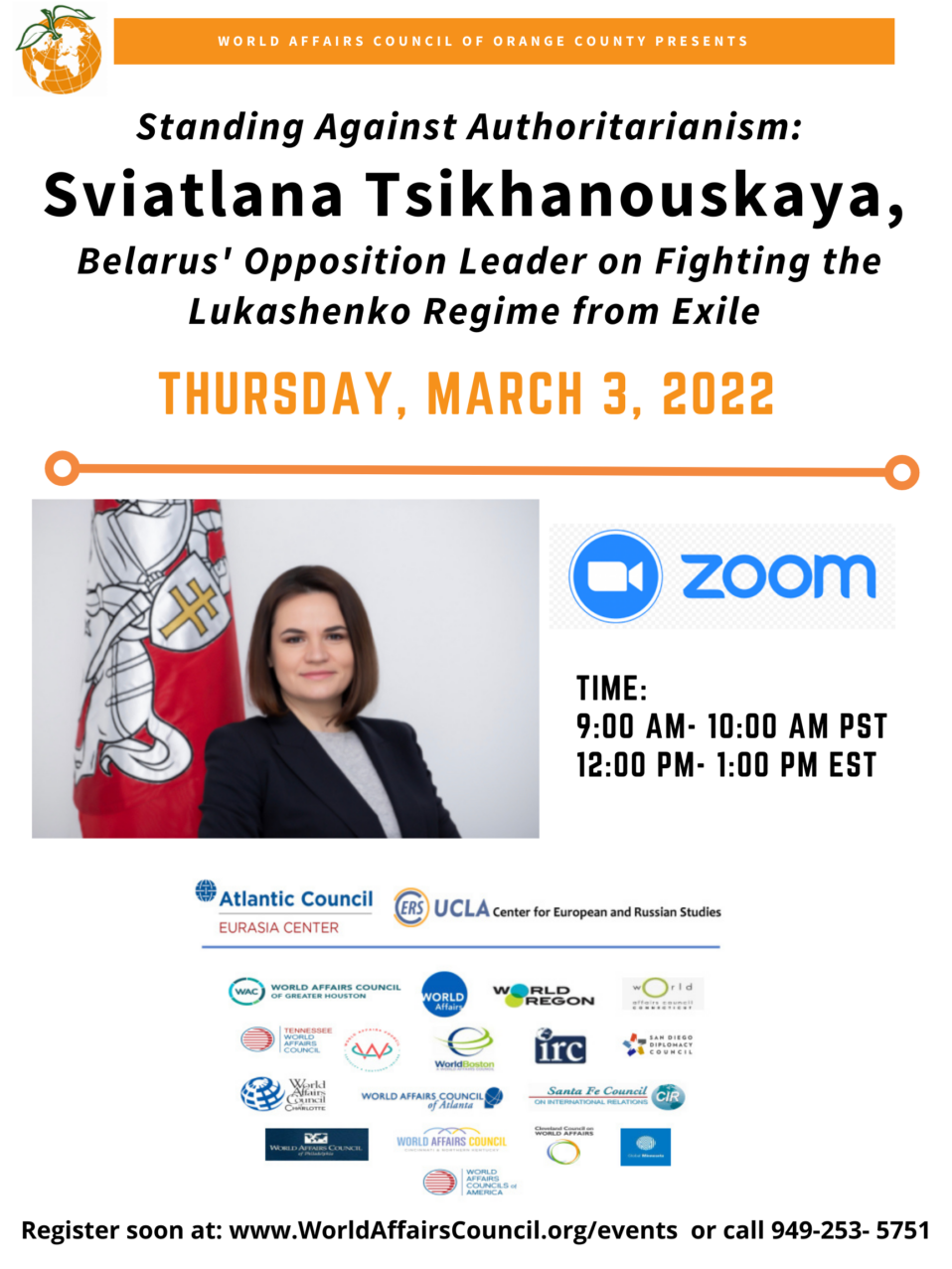 Hosted in Partnership with UCLA Center for European and Russian Studies

Sviatlana Tsikhanouskaya is the leader of the Belarusian democratic forces who independent observers agree won the presidential election on August 9, 2020, against the autocratic President Aliaksandr Lukashenka.

As the leader of the Belarusian democratic movement, she has visited 26 countries, gathering support and advocating for the release of almost a 1000 of political prisoners and a peaceful transition of power through free and fair elections. In meetings with President Biden, Chancellor Merkel, President Macron, President von der Leyen, President Charles Michel, and other world leaders, Tsikhanouskaya emphasized the need for a braver response to the actions of the Belarusian dictatorship.

Tsikhanouskaya’s story began when she entered the race after her husband Siarhei Tsikhanousky was arrested for voicing his presidential aspirations. Lukashenka publicly dismissed her as a “housewife,” saying that a woman cannot become president. Nonetheless, Tsikhanouskaya united and successfully led the democratic coalition along with two other leaders, Maria Kalesnikava and Veranika Tsapkala. Following her forced exile, Sviatlana Tsikhanouskaya inspired unprecedented peaceful protests in Belarus, with some rallies numbering at least 200,000 people.

In 2020–2022, Sviatlana Tsikhanouskaya became a symbol of the peaceful struggle for democracy and strong female leadership. Among dozens of distinctions, she is a recipient of the Sakharov Prize awarded by the European Parliament, 2022 International Four Freedoms Award, and Charlemagne Prize. She was nominated for the Nobel Peace Prize by Lithuanian President Gitanas Nauseda and Members of the Norwegian Parliament. Tsikhanouskaya has been recognized in Bloomberg’s Top 50 Most Influential People, Financial Times’ Top 12 Most Influential Women, and Politico’s Top 28 Most Influential Europeans.

Haring has worked for Eurasia Foundation, Freedom House, and the National Democratic Institute, where she managed democracy assistance programs in Azerbaijan, Georgia, and Russia. A graduate of Georgetown University, she holds an MA in Government with a certificate in Russian, Eurasian, and East European Studies.

Your ticket for the: Standing Against Authoritarianism: Sviatlana Tsikhanouskaya, Belarus’ Opposition Leader on Fighting the Lukashenko Regime from Exile