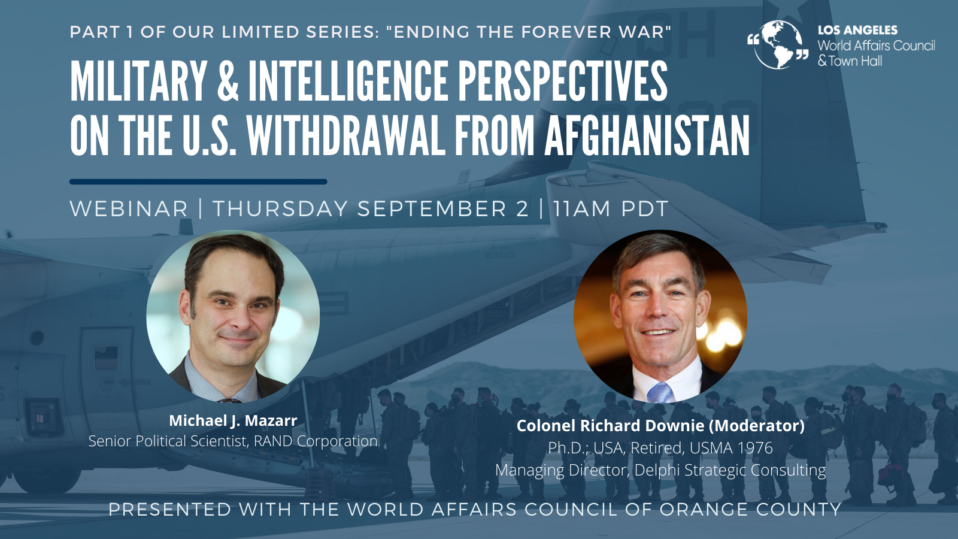 Military and Intelligence Perspectives on the U.S. Withdrawal from Afghanistan

Part ONE of our limited series “Ending the Forever War: The Past, Present, and Future of War in Afghanistan”

The two-decade-long U.S. war in Afghanistan proved to be the longest war in American history, spanning twenty years and four Presidential administrations. It took tens of thousands of lives and cost the U.S. trillions of dollars. After the complicated U.S. troop withdrawal and subsequent Taliban take-over, there are many conflicting opinions, as well as, rapidly changing material challenges in the region and across the globe. To make sense of the intricate military, political, and diplomatic forces at play, join our limited series of conversations: “Ending the Forever War: The Past, Present, and Future of War in Afghanistan.”

To address these questions, we’re hosting Dr. Michael J. Mazarr, a senior political scientist at the RAND Corporation. Previously, Dr. Mazarr worked at the U.S. National War College, where he was professor and associate dean of academics; as president of the Henry L. Stimson Center; senior fellow at the Center for Strategic and International Studies; senior defense aide on Capitol Hill; and as a special assistant to the Chairman of the Joint Chiefs of Staff. Dr. Mazaar will be in conversation with Colonel Richard Downie, Ph.D. (USA Retired, USMA 1976) who has over 35 years of experience leading military, civilian government and private sector organizations.

Register for Event: September 2, 2021: Military and Intelligence Perspectives on the U.S. Withdrawal from Afghanistan

Your ticket for the: September 2, 2021: Military and Intelligence Perspectives on the U.S. Withdrawal from Afghanistan