September 13, 2021: The Past, Present, and Future of US-Afghanistan Relations and Foreign Policy 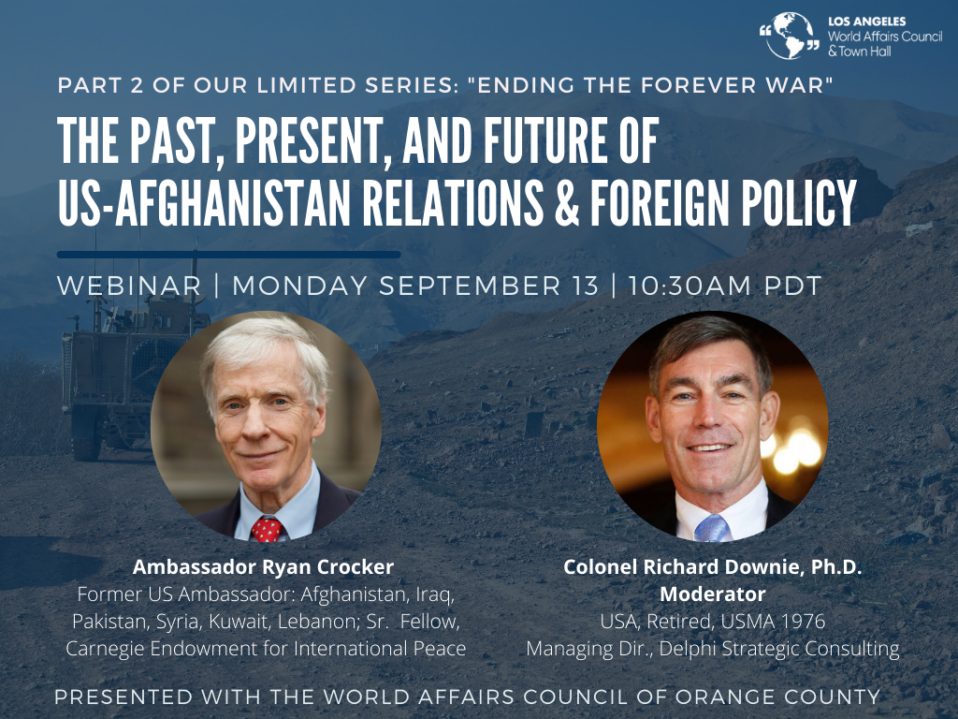 The Past, Present, and Future of US-Afghanistan Relations and Foreign Policy

Two weeks before the U.S. was scheduled to complete the troop withdrawal from Afghanistan, Taliban insurgents blazed through the country. Within a matter of days, the U.S.-backed Afghan government fled the country, while the U.S. and its allies scrambled to evacuate all personnel. Shocking images quickly emerged of fearful crowds to the Kabul International Airport hoping to evacuate alongside U.S. military and foreign service members.

Join us for a timely and necessary conversation on the past, present, and future of U.S. foreign policy in Afghanistan with career Foreign Service Officer and former Ambassador to Afghanistan Ryan Crocker. Ryan served as an American Ambassador six times, holding this title in Afghanistan, Iraq, Pakistan, Syria, Kuwait, and Lebanon. Ambassador Crocker holds a Presidential Medal of Freedom and is currently a Nonresident Senior Fellow at the Carnegie Endowment for International Peace. He also serves on the Board of Advisors of No One Left Behind, an NGO dedicated to ensuring that America keeps its promises to Afghans and Iraqis who risked their lives to support us. Ambassador Crocker will be in conversation with Colonel Richard Downie, Ph.D. and USA, Retired, USMA 1976)

The discussion will unpack the complicated and conflicting layers of the longest, and more recently, the most unpopular, war in American history. While Joe Biden became the fourth President to be titled “Commander of Chief” of this war, many are asking whether his decision to end it was correct and whether the mission was executed to the best of U.S. abilities. Along with addressing these key questions, Ambassador Crocker will help unpack how we got here and what’s going to happen in the coming months and years — in Afghanistan, the U.S., and the global community.

Register for Event: September 13, 2021: The Past, Present, and Future of US-Afghanistan Relations and Foreign Policy

Your ticket for the: September 13, 2021: The Past, Present, and Future of US-Afghanistan Relations and Foreign Policy

September 13, 2021: The Past, Present, and Future of US-Afghanistan Relations and Foreign Policy