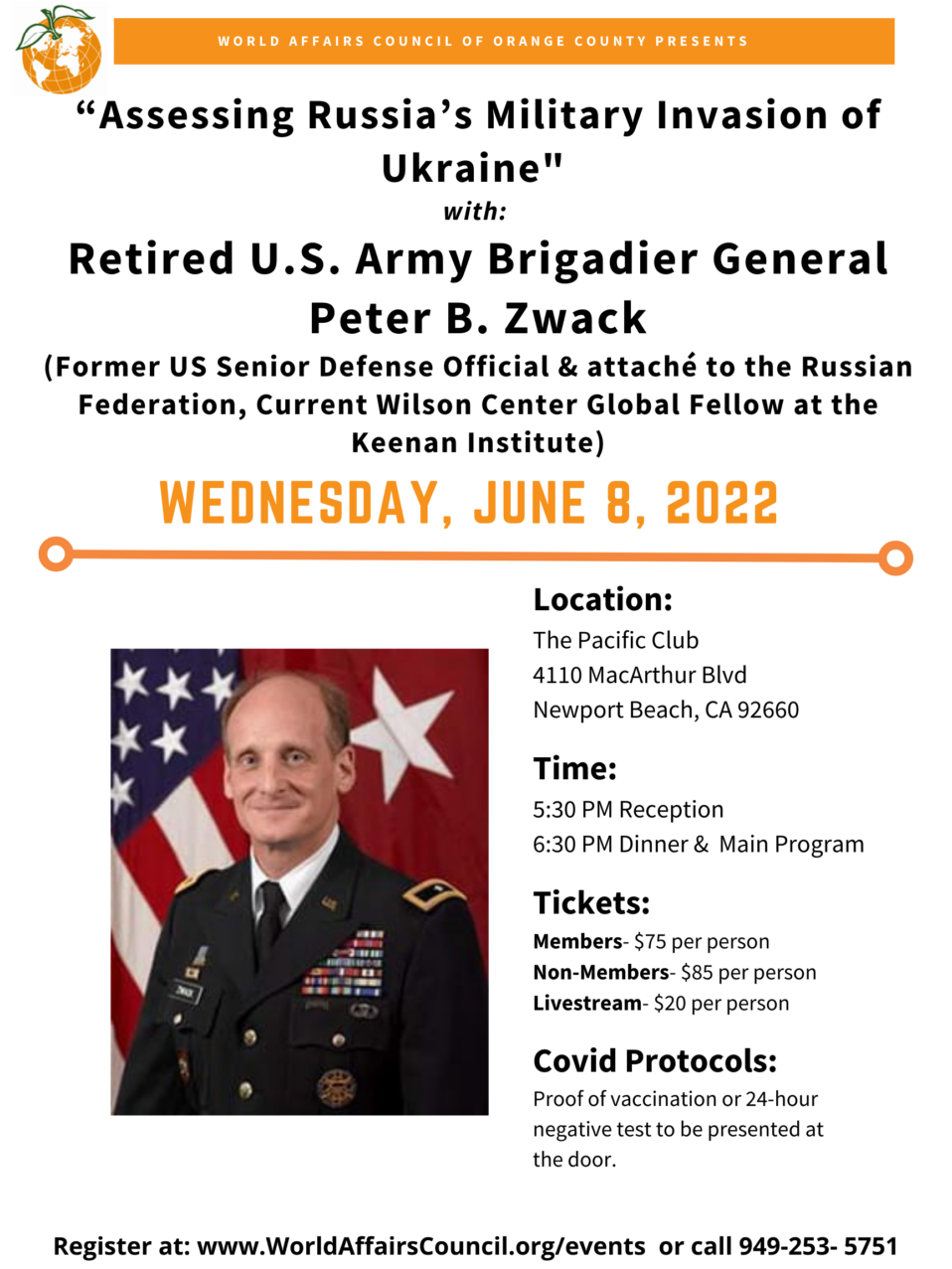 (Former U.S. Army Brigadier General- served in Moscow from 2012 to 2014 as the U.S. senior defense official and attaché to the Russian Federation

We are delighted to invite you to our event on June 8, 2022. We will be returning to the prestigious Pacific Club where Peter B. Zwack will discuss how “in the opening days of Russia’s massive invasion of Ukraine, many observers expected it would take a matter of weeks, if not days, for the Russian army to force major concessions out of Kyiv. Two months later, Russia was forced to abandon its campaign to take Kyiv, and its invading forces have suffered enormous casualties in terms of personnel and equipment. Brigadier General (Ret.) Peter B. Zwack, a Global Fellow with the Wilson Center’s Kennan Institute, will assess Russia’s performance and provide his own personal perspectives on Russia itself.”

From 2012 – 2014, BG (r) Peter Zwack served as the United States Senior Defense Official and Attache to the Russian Federation. By interacting with Russians at multiple levels since 1989, including defense, security, academia, policy, veterans, and private citizens, BG Zwack developed a personal hands-on perspective on Russia and Eurasian security affairs during a turbulent period that included the recent strife in Crimea and Eastern Ukraine.

BG Zwack enlisted in the US Army in 1980 and received his commission via Officer Candidate School (OCS) at Fort Benning, Georgia. He subsequently served 34 years as a Military Intelligence and Eurasian Foreign Area Officer serving in diverse and challenging duty locations including West Germany, South Korea, Kosovo, Afghanistan, and Russia. Inducted into the OCS Hall of Fame in 2015, BG Zwack is a recipient of the Bronze Star, Distinguished Service Medal, Legion of Merit and numerous other awards and decorations. He was also honored as the Joint Chief’s of Staff “Action Officer of the Year” in 1999 and proudly wears the Ranger Tab and Airborne Wings.

Retired in 2015, he served as the Senior Russia-Eurasia Fellow at the Institute of National Strategic Studies, National Defense University and is also an Adjunct Fellow at the Pell Center, Salve Regina University in Newport, Rhode Island. As such, he regularly consults, writes and lectures within the interagency, defense department, think tanks, and academic institutions on contemporary Russian and Eurasian security issues, and leadership lessons learned. BG Zwack speaks Russian, German, Italian, and some French.

Your ticket for the: “Assessing Russia’s Military Invasion of Ukraine” with Retired U.S. Army Brigadier General Peter B. Zwack