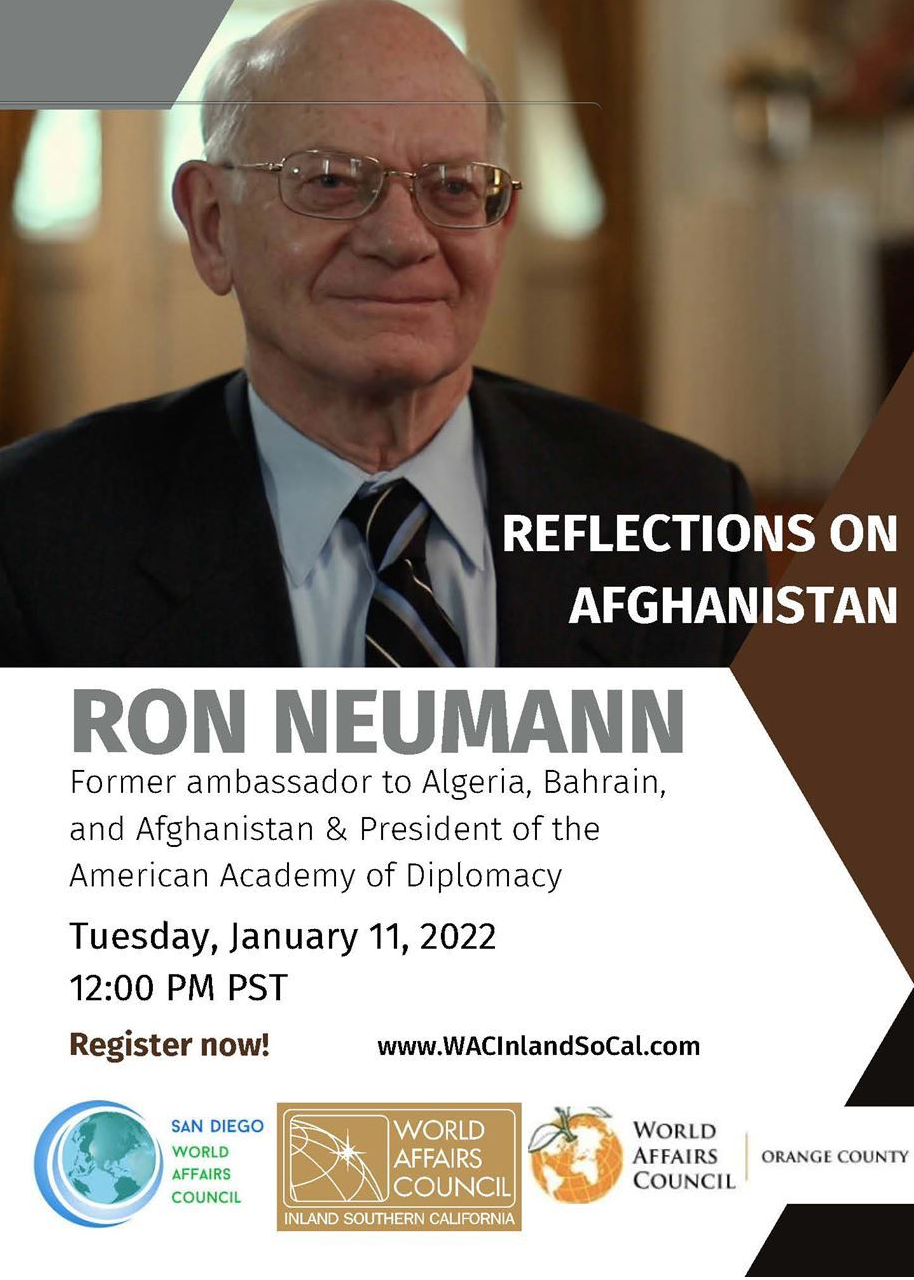 (Former ambassador to Algeria, Bahrain, and Afghanistan & President of the American Academy of Diplomacy)

Formerly a Deputy Assistant Secretary of State, Ronald E. Neumann served three times as Ambassador; to Algeria, Bahrain and finally to Afghanistan from July 2005 to April 2007. Before Afghanistan, Mr. Neumann, a career member of the Senior Foreign Service, served in Baghdad from February 2004 with the Coalition Provisional Authority and then as Embassy Baghdad’s liaison with the Multinational Command, where he was deeply involved in coordinating the political part of military actions.

Ambassador Neumann is the author of a memoir, Three Embassies, Four Wars: a personal memoir (2017) and The Other War: Winning and Losing in Afghanistan (Potomac Press, 2009), a book on his time in Afghanistan. He has returned to Afghanistan repeatedly and is the author of a number of monographs, articles, and editorials. His writings have focused most heavily on Afghanistan, stabilization, and Bahrain. At the Academy of Diplomacy, he has focused particularly on efforts to maintain adequate State and USAID budgets and staffing and upgrade professional formation to enable these institutions to carry out their responsibilities. Ambassador Neumann is on the Advisory Board of a non-profit girls’ school in Afghanistan, the School of Leadership, Afghanistan (SOLA) and the Advisory Board of Spirit of America. He is on the board of the Middle East Policy Council and the Advisory Council of the World Affairs Councils of America.

He received State Department Superior Honor Awards in 1993 and 1990. He was an Army infantry officer in Viet Nam and holds a Bronze Star, Army Commendation Medal and Combat Infantry Badge. In Baghdad, he was awarded the Army Outstanding Civilian Service Medal. He earned a B.A. in history and an M.A. in political science from the University of California at Riverside and is a graduate of the National War College. He is married to the former M. Elaine Grimm. They have two children.

Your ticket for the: “Reflections on Afghanistan with Ambassador Ronald E. Neumann”