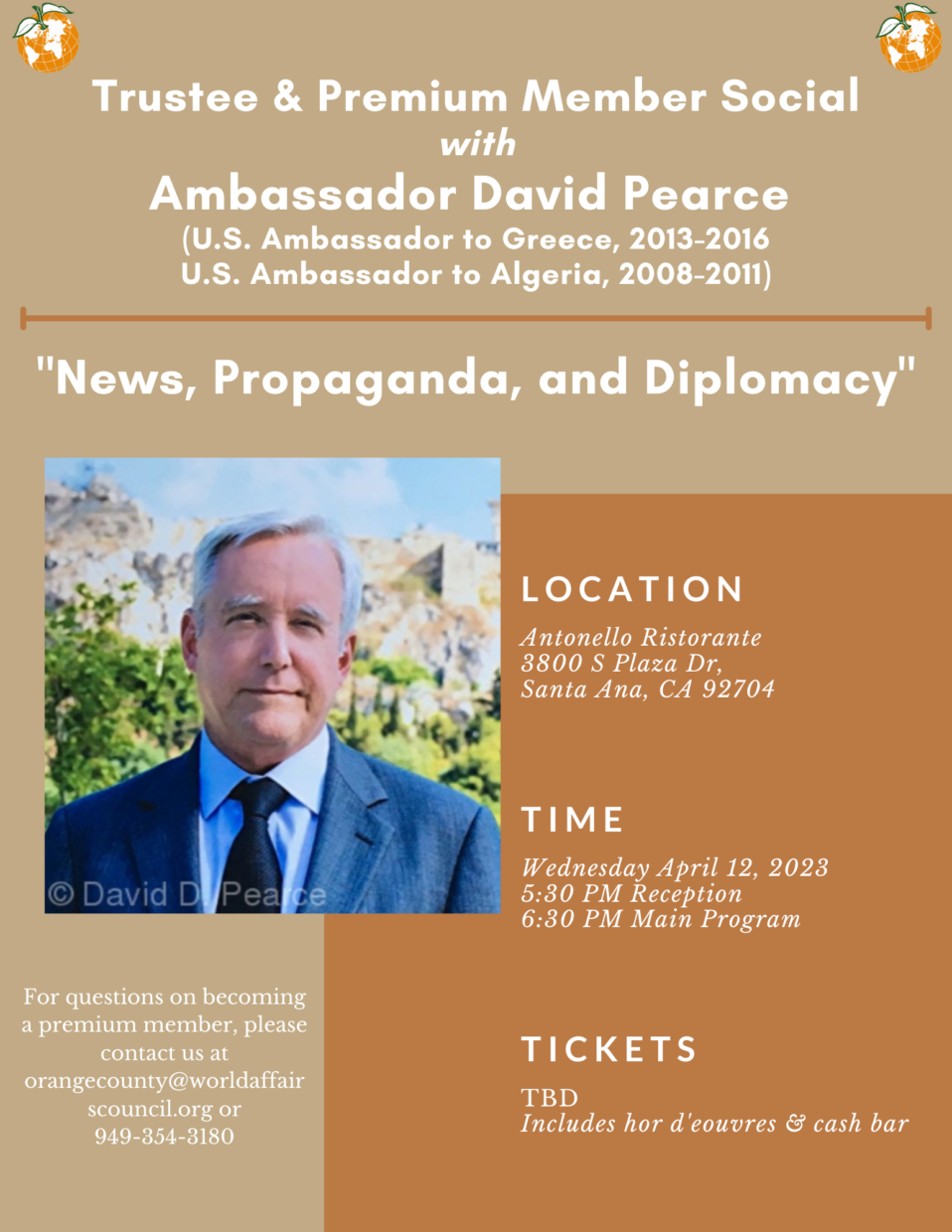 A Trustee and Premium Member Social

In his diplomatic and journalistic career Maine native David D. Pearce has always done the hard things in the hard places. As a wire service reporter, he covered revolution in Lisbon, civil war in Beirut, and political and economic change in the Arab world. He met his wife, Leyla, while serving in Lebanon as United Press International’s Chief Middle East Correspondent, and both of their children were born in Beirut. As a writer-editor with the National Geographic’s book service, he traveled with a photographer to Southeast China as the country was just beginning to open up to the outside world, and authored the concluding chapter of the 1982 NGS book Journey Into China.

Joining the U.S. Department of State next, Pearce learned Arabic and served over three decades in 11 overseas posts throughout Europe, the Middle East, North Africa, and South Asia. He was political section chief in Kuwait when Iraq invaded and deputy chief of mission in Syria for four years, during which time the embassy was attacked by mobs twice. He was Consul General in Dubai, Consul General and Chief of Mission in Jerusalem, Assistant Chief of Mission in Afghanistan, and Ambassador to both Algeria and Greece. Pearce served in Washington as a Deputy Assistant Secretary of State, and held senior-level positions in the State Department with responsibility for Iraq, Iran, Afghanistan and Pakistan. He is an avid student of Greek, Roman and Islamic history, art, and literature. Since leaving the Foreign Service in 2016, he has been a strong advocate via speaking, writing and social media engagement of the importance of U.S. diplomatic engagement and public service.

A self-taught artist, Pearce’s travels nourished a lifelong habit of drawing, but he only began to paint actively in 2008. Dividing his time now between Southern California and his home state of Maine, he uses a variety of techniques to convey not so much literal reality as a sense of moment and place as he experienced it at the time. His medium of choice is watercolor, because — as in his diplomatic and journalistic career — he likes the degree of difficulty and the constant challenge of turning sudden developments into unexpected opportunity.

Your ticket for the: “News, Propaganda, and Diplomacy” with Amb. David Pearce