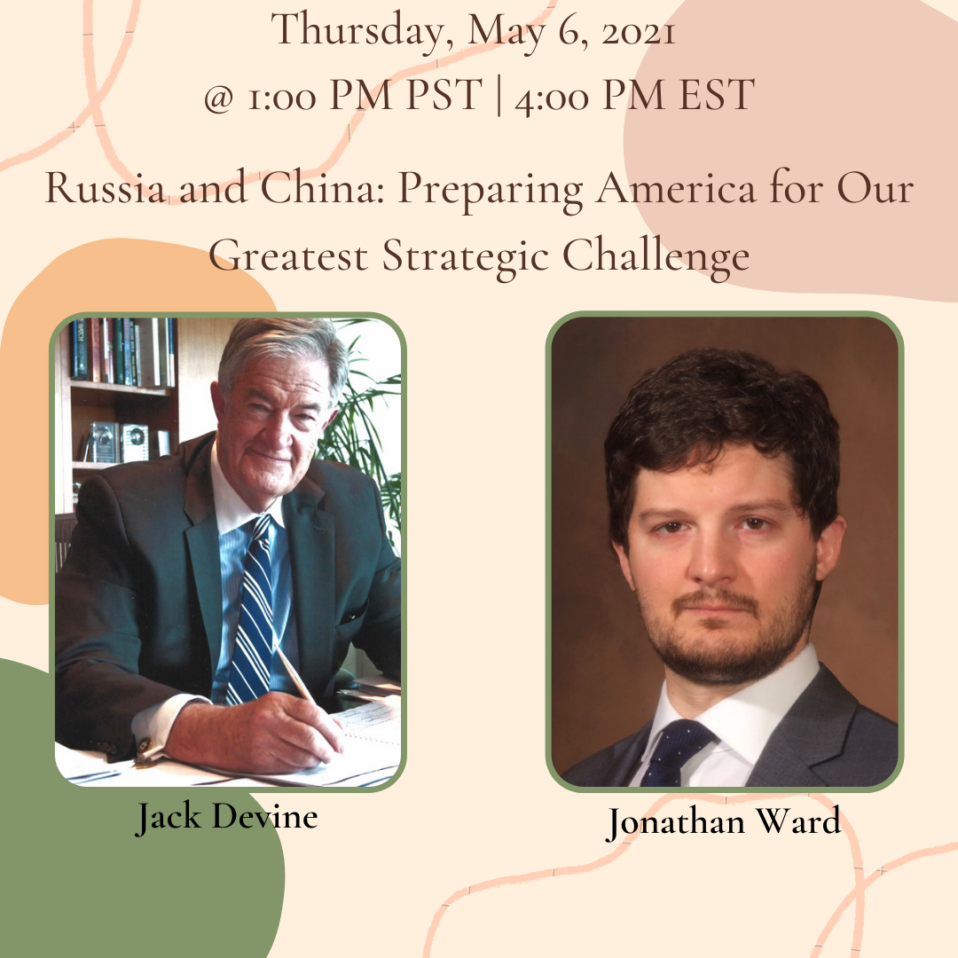 Russia and China: Preparing America for Our Greatest Strategic Challenge

Jack Devine is a thirty-two-year veteran of the Central Intelligence Agency who served at the pinnacle of his career as the CIA’s top spymaster—Acting Deputy Director of the CIA’s operations outside the United States, in which capacity he had supervisory authority over thousands of CIA employees involved in sensitive missions throughout the world. He is also a founding partner and the president of the Arkin Group, an international risk consulting and intelligence firm. Mr. Devine’s international experience with the U.S. government included postings to Latin America and Europe. During his more than 30 years with the CIA, Mr. Devine was involved in organizing, planning and executing countless sensitive projects in virtually all areas of intelligence, including analysis, operations, technology and management.

He is the recipient of the Agency’s Distinguished Intelligence Medal and several meritorious awards. He is a recognized expert in Intelligence matters and has written Op-Ed articles for The Washington Post, The Wall Street Journal, The Financial Times, Foreign Affairs Magazine, The World Policy Journal, Politico and The Atlantic Monthly. He has also made guest appearances on National Press Club, CNN, CBS, NBC, MSNBC, Fox News, CSPAN, Bloomberg News as well as the History and Discovery channels, PBS, NPR and ABC Radio.

Dr. Jonathan D. T. Ward is an internationally recognized expert on Chinese global strategy and US-China competition. He earned his PhD in China-India relations at the University of Oxford and his undergraduate degree at Columbia University where he studied Russian and Chinese language.

Dr. Ward brings a unique perspective on China, India, and US-China strategic competition to global audiences and businesses given his background of on-the-ground global travel, foreign languages, scholarly work, and extensive geopolitical consulting for large organizations. He lived and traveled globally for over a decade, in China, India, Russia, Latin America, Europe, and the Middle East. He speaks Chinese, Russian, Spanish, and Arabic.

Dr. Ward has consulted for the US Department of Defense, Fortune 500 corporations, and leading asset managers on US-China global competition and Chinese grand strategy. He is a frequently invited speaker for government, military, industry, and financial audiences. He has briefed the US Defense Intelligence Agency, US Indo-Pacific Command, the US Department of Commerce, US Strategic Command, the US Department of Homeland Security, the US Chamber of Commerce, the House Foreign Affairs Committee, and the diplomatic missions of India, the United Kingdom, and Australia to the US, as well as leading corporations in the defense, aerospace, technology, financial services, telecommunications, automotive, and industrial sectors.

In January 2020, Dr. Ward was commended by the President of the United States in his remarks to industry leaders at the White House at the signing ceremony of the US-China Phase One Trade Deal. He was recently selected for the Stephen M. Kellen Term Member Program at the Council on Foreign Relations and is a member of the Next Generation National Security Leaders Program at the Center for a New American Security in Washington, DC.

Register for Event: May 6, 2021: “Russia and China: Preparing America for Our Greatest Strategic Challenge”

Your ticket for the: May 6, 2021: “Russia and China: Preparing America for Our Greatest Strategic Challenge”