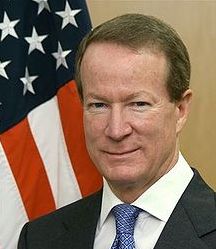 Bill Brownfield, now a Senior Adviser at the Center for Strategic and International Studies (CSIS), was promoted to the rank of Career Ambassador, the highest rank in the U.S. Foreign Service, in 2012.  For the last seven years of his career, he was Assistant Secretary for Drugs and Law Enforcement (INL), running a portfolio of more than $4 billion in 80 countries administered by 5000 employees and contractors.  His responsibilities ranged from police training and assistance in Afghanistan and Iraq, massive anti-drug efforts in Colombia and Mexico, crisis management in Central America, and police development in the Palestinian West Bank to maritime law enforcement in the South China Sea and stopping the flow of heroin/fentanyl into the United States.

As Ambassador to Colombia, Brownfield ran an embassy of 4000 employees and $1 billion budget supporting an enormous range of military, security, law enforcement, economic and humanitarian programs with the Colombian government.  In Venezuela, he led an embassy in constant crisis with the most adversarial government of any country in the Hemisphere, if not the world.  As Ambassador to Chile, he managed a sophisticated relationship with a mature and stable government leading to the first U.S. free trade agreement in Latin America since NAFTA in 1993.

Brownfield has United Nations experience in Geneva (humanitarian) and Vienna (drugs and crime).  He was temporary Political Adviser to the U.S. Southern Command.  He received the Secretary’s Distinguished Service Award and the Presidential Performance Award three times each.  He is a graduate of Cornell University and the National War College.  He attended the University of Texas School of Law.  He speaks Spanish and French.  Brownfield is a native of the State of Texas. His wife, Kristie Kenney, is also a Career Ambassador and previous ambassador to Thailand, The Philippines, and Ecuador.

Your ticket for the: June 22nd, 2020: Venezuela- America’s Greatest Challenge in the Western Hemisphere with Ambassador William Brownfield