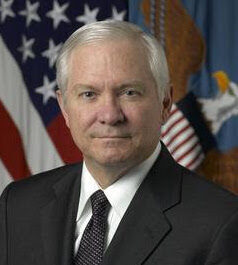 This event is presented by World Affairs Council of Orange County in partnership with:

Exercise of Power: American Failures, Successes, and a New Path Forward in the Post-Cold War World

A Free Webinar with Robert M. Gates, Secretary of Defense under Presidents Bush and Obama

Dr. Robert M. Gates brings his decades of observation and participation guarding the security of the nation to a fresh examination of the exercise and limitations of American power. Gates recently wrote in Foreign Affairs that “Most Americans want their country to stand for something beyond just military strength and economic success. They want it to be seen admiringly by others as the world’s strongest advocate for liberty.” He believes that a restructured and strengthened State Department would enable the U.S. to accept the burden of global leadership, in a manner that reduces risk for the nation. Kirkus Reviews said of Gates’ new book, “It’s refreshing to see a secretary of defense call for the use of the military as a choice of last resort.”

Your ticket for the: June 18th, 2020: Exercise of Power: American Failures, Successes, and a New Path Forward in the Post-Cold War World