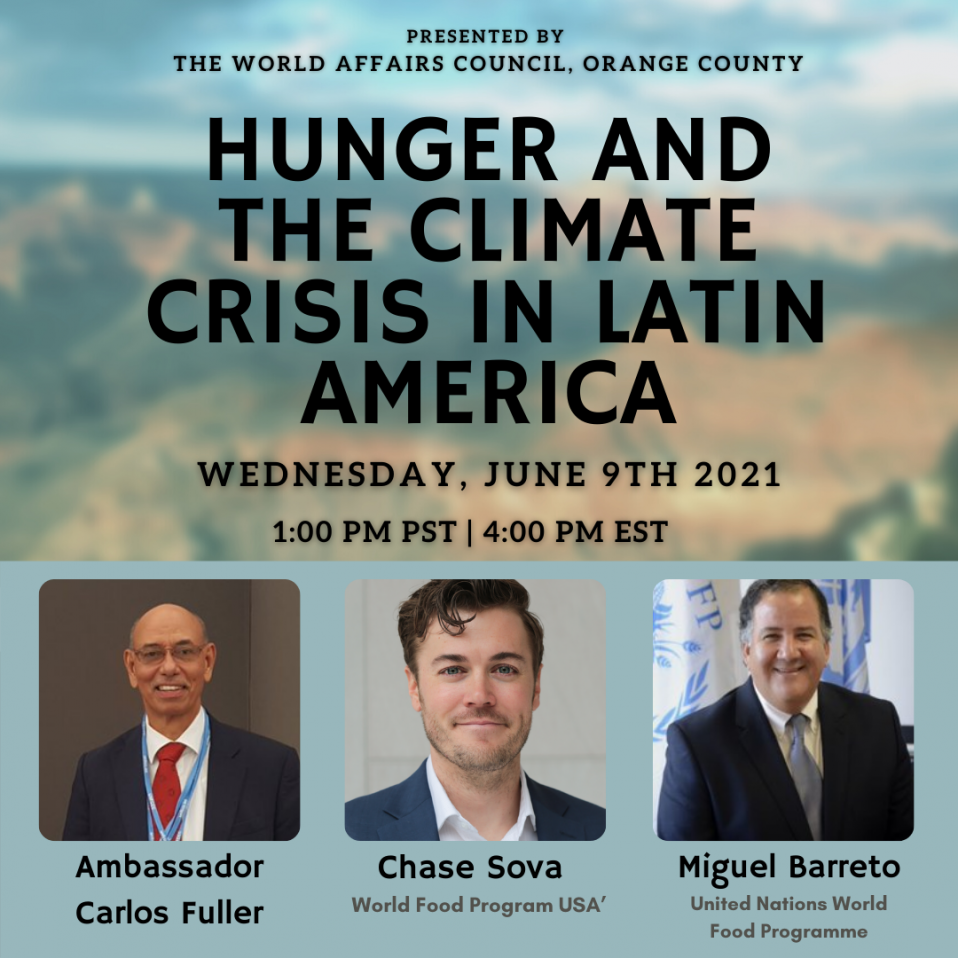 Hunger and the Climate Crisis in Latin America

About:
Climate change is a key driver of hunger globally. Nowhere is that truer than in Central America, where years of extreme weather events, coupled with COVID-19’s economic crisis, is creating severe food insecurity. According to the United Nations World Food Programme, hunger in El Salvador, Guatemala, Honduras and Nicaragua has increased almost fourfold over the past two years—from 2.2 million people in 2018 to close to 8 million people in 2021. Hurricanes, torrential rain, flooding, and recurring droughts have devastated communities and disrupted food production, especially staples like maize and beans which depend on regular rainfall. During the record 2020 Atlantic hurricane season, Hurricanes Eta and Iota upended the lives of 6.8 million people who lost their homes and livelihoods. Climate-induced hunger is also driving migration, as people displace in search of food and work. For every 1 percent increase in food insecurity, the U.N. World Food Programme reports a 2 percent increase in migration. Join our panelists as we explore the climate crisis’ interrelated impact on hunger, livelihoods, and migration in Latin America and how the U.N. World Food Programme is building resilience and food security among vulnerable communities.

Mr. Carlos Fuller is the Ambassador and Permanent Representative of Belize to the United Nations in New York. He is a meteorologist. His previous positions include Chief Meteorologist in the National Meteorological Service of Belize and International and Regional Liaison Officer at the Caribbean Community Climate Change Centre. He has represented Belize in the international climate change negotiations for the past 30 years. He was awarded the George Price Lifetime Achievement Award for Emergency Management and the Officer of the Order the British Empire (OBE) for public service.

Chase Sova is senior director of Public Policy and Thought Leadership at World Food Program USA (WFP USA) and Senior Associate (non-resident) with the Center for Strategic and International Studies Global Food Security Program. Previously, Chase worked with the United Nations Food and Agriculture Organization (FAO), International Center for Tropical Agriculture (CIAT) and the CGIAR Research Program on Climate Change, Agriculture and Food Security (CCAFS). He has consulted with the World Bank, Johns Hopkins, and Tufts University. Interested in the intersection of food insecurity and conflict, humanitarian assistance, climate change, and sustainable agriculture, Chase has worked on food systems in 15 developing countries across Latin America, sub-Saharan Africa and South Asia. He has led several major research initiatives including WFP USA’s Winning the Peace: Hunger and Instability flagship report. Chase has served as an expert witness at the Senate Foreign Relations Committee, his writing has been featured extensively in peer-reviewed journals, and he regularly lectures on food insecurity at Universities in Washington, D.C. He delivered a TEDx talk on “Winning the Long Game in the Fight to End Hunger” in 2018. Chase earned his Ph.D. from Oxford University.

Miguel Barreto assumed the position of Regional Director of the World Food Programme (WFP) for Latin America and the Caribbean in January 2014. As Regional Director, he is responsible for the coordination and oversight of WFP humanitarian operations in 12 countries of Latin American and the Caribbean.He has 28 years of experience as a career diplomat and as an international civil servant with the United Nations. Prior to his current position, Miguel Barreto gained extensive field experience in humanitarian and development assistance as WFP Deputy Country Director in Ethiopia (2006-2009) and WFP Representative in Honduras (2009-2013) and Colombia (2013). Barreto temporarily served as Resident Coordinator and the UN Country Director in Honduras (2011-2012). He also held the following posts: Representative of the Latin America and Caribbean Group at the WFP Executive Board (2003-2005), Vice-Chairman of the FAO World Food Security Committee (2001-2002), Member of the FAQ Programme Committee (1999-2000), and member of the WFP Government Group.

Ambassador Vasquez is the United States’ 8th Ambassador to the United Nations Agencies for Food and Agriculture, in Rome, Italy. Ambassador Vasquez’s public service graduated from the city to county, state and federal levels of government. He began his 28-year career in public service as a police officer in Orange, California, served as an appointee for three former California governors, and was appointed by former President George H. W. Bush to two federal commissions. From 2002 to 2006, he served as the Director of the United States Peace Corps. In 2019, he retired as Senior Vice President of Government Affairs for Edison International and Southern California Edison, one of the nation’s largest investor-owned utilities.

Register for Event: June 9, 2021: Hunger and the Climate Crisis in Latin America

Your ticket for the: June 9, 2021: Hunger and the Climate Crisis in Latin America