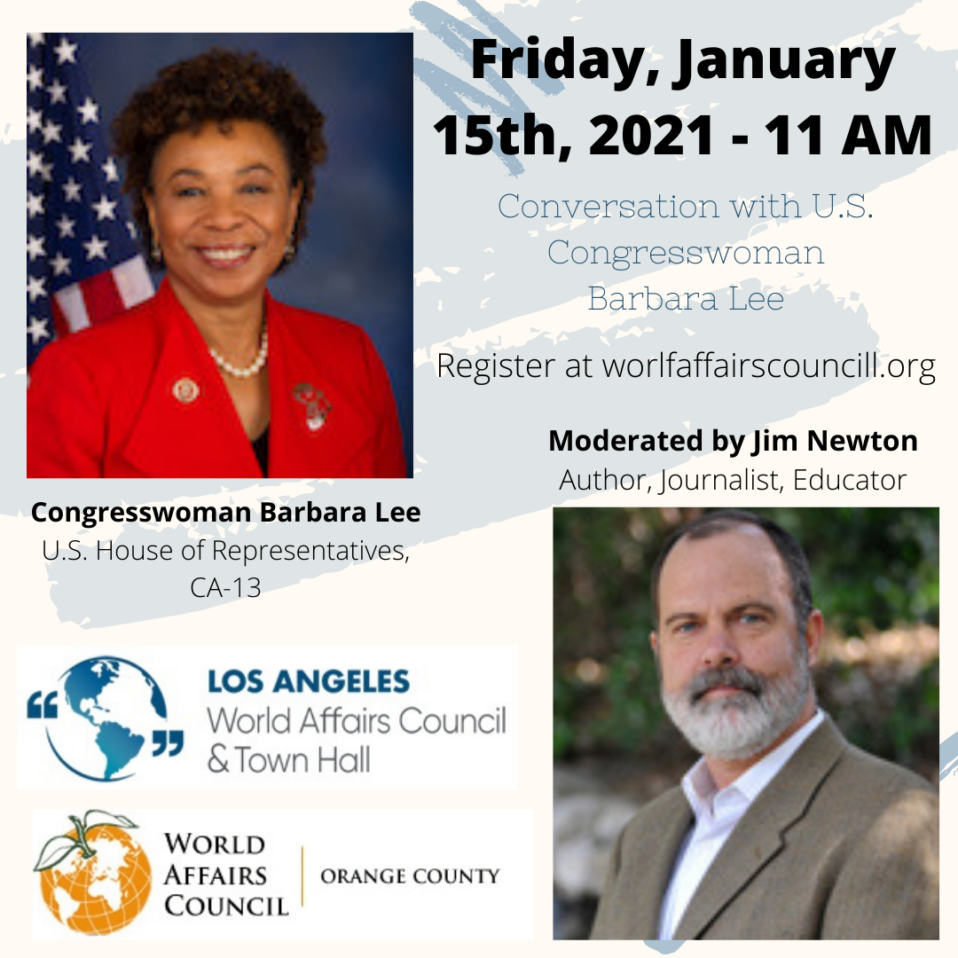 U.S. Congressmember Barbara Lee in a conversation moderated by journalist, author and educator Jim Newton on what’s ahead as Joe Biden will be inaugurated as the 46th President.

In the new year, the Democrats will retain control of the House of Representatives as the 117th U.S. Congress is scheduled to reconvene as early as Jan. 3, and the Georgia Senate run-off elections take place on Jan. 5. Biden, in his first 100 days, has identified defeating the coronavirus pandemic with mask-wearing, distributing 100 million vaccine shots and reopening schools as key priorities.

Congresswoman Barbara Lee is a leading voice for social and economic justice, international peace, and civil and human rights. Congresswoman Lee was first elected to Congress in 1998 after serving in the California State Legislature. In Congress, Rep. Lee served on the House Foreign Affairs Committee, and has been appointed four times as the Democratic Congressional Representative to the General Assembly of the United Nations. She has led trade delegations to Africa and the Caribbean, and has authored or co-authored every major piece of legislation dealing with global HIV/AIDS issues since she was elected to Congress.

After the Sept. 11, 2001 terrorist attacks, Congresswoman Lee was the lone vote against a resolution that gave the President virtually unlimited authority to use force against unspecified organizations, individuals or nations for an unlimited time period. She has consistently fought to stop endless wars around the world and to reduce conditions that produce conflict and injustice. Congresswoman Lee is a senior member of the House Appropriations Committee, and as a member of the House Democratic Leadership, she is the highest ranking African American woman in the U.S. Congress.

Jim Newton (moderator) is a veteran journalist, author and teacher. In 25 years at the Los Angeles Times, Newton worked as a reporter, editor, bureau chief, columnist and, from 2007 through 2010, editor of the editorial pages. He is the recipient of numerous national and local awards in journalism and participated in two staff efforts, coverage of the 1992 riots and the 1994 Northridge Earthquake, that were awarded the Pulitzer Prize. He came to UCLA full-time in 2015 to teach in Communication Studies and Public Policy and to found and edit Blueprint (blueprint.ucla.edu), a magazine addressing the policy challenges facing California and Los Angeles. Newton has authored three works of history: Justice for All: Earl Warren and the Nation He Made; Eisenhower: The White House Years; and Worthy Fights: A Memoir of Leadership in War and Peace, a collaboration with former CIA Director and Secretary of Defense Leon Panetta. His newest book, “Man of Tomorrow,” published in 2020, chronicles Jerry Brown as the longest-serving governor in California.

Your ticket for the: January 15th, 2021: A Conversation with U.S. Congresswoman Barbara Lee