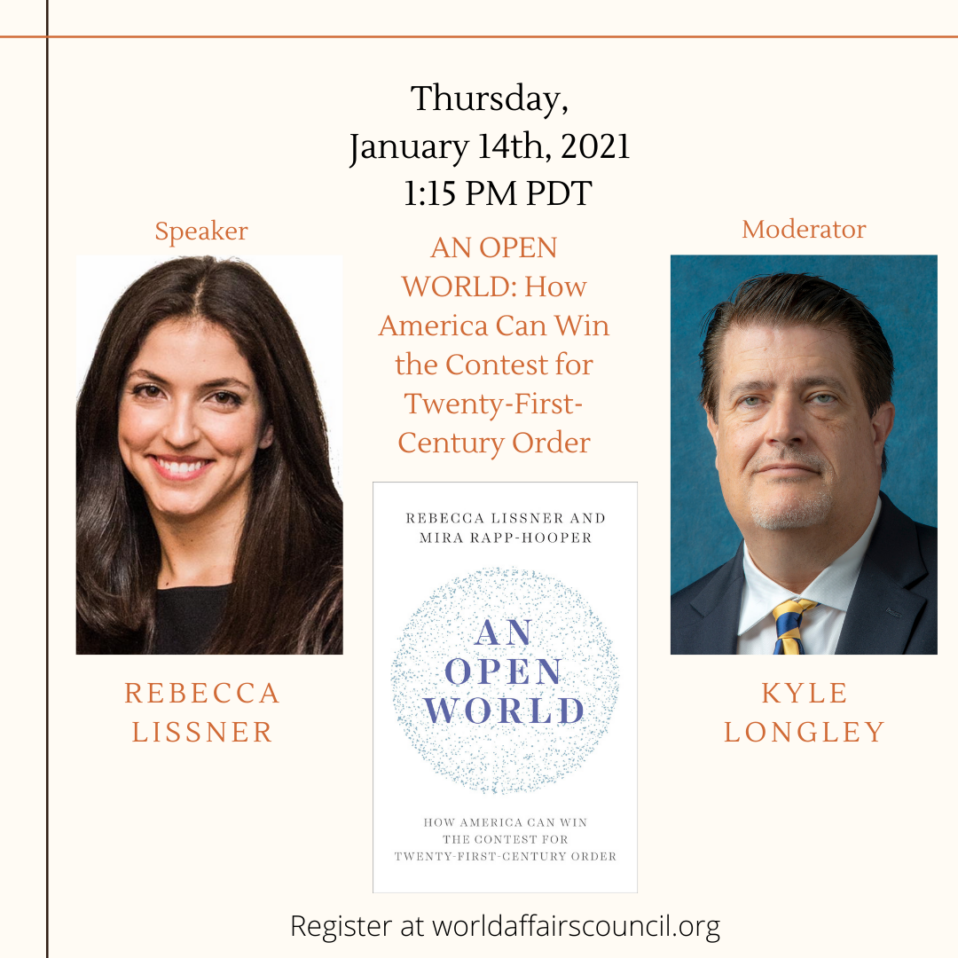 AN OPEN WORLD: How America Can Win the Contest for Twenty-First-Century Order

A free webinar with Rebecca Lissner

Rebecca Lissner is an Assistant Professor in the Strategic and Operational Research Department at the U.S. Naval War College and a Non-Resident Scholar at Georgetown University’s Center for Security Studies. Previously, Dr. Lissner held research fellowships at the University of Pennsylvania’s Perry World House, the Council on Foreign Relations, and International Security Studies at Yale University. She also served as Special Advisor to the Deputy Secretary at the U.S. Department of Energy and, during the 2016 election cycle, advised the Hillary Clinton campaign and transition team on foreign policy.

Dr. Lissner’s research and writing focuses on U.S. national security strategy and the future of international order. She is the co-author of An Open World: How America Can Win the Contest for Twenty-First-Century Order (Yale University Press, 2020) and her second book, Wars of Revelation: The Transformative Effects of Military Intervention on Grand Strategy, will be published by Oxford University Press. Her scholarship has been published in Political Science Quarterly, the Texas National Security Review, Survival, Presidential Studies Quarterly, and International Peacekeeping. Her policy writing has appeared in Foreign Affairs, Foreign Policy, and The Washington Quarterly, among other publications. Dr. Lissner received an AB in Social Studies from Harvard University and an MA and PhD in Government from Georgetown University. She tweets @RebeccaLissner.

Register for Event: January 14th, 2021: “AN OPEN WORLD: How America Can Win the Contest for Twenty-First-Century Order”

Your ticket for the: January 14th, 2021: “AN OPEN WORLD: How America Can Win the Contest for Twenty-First-Century Order”