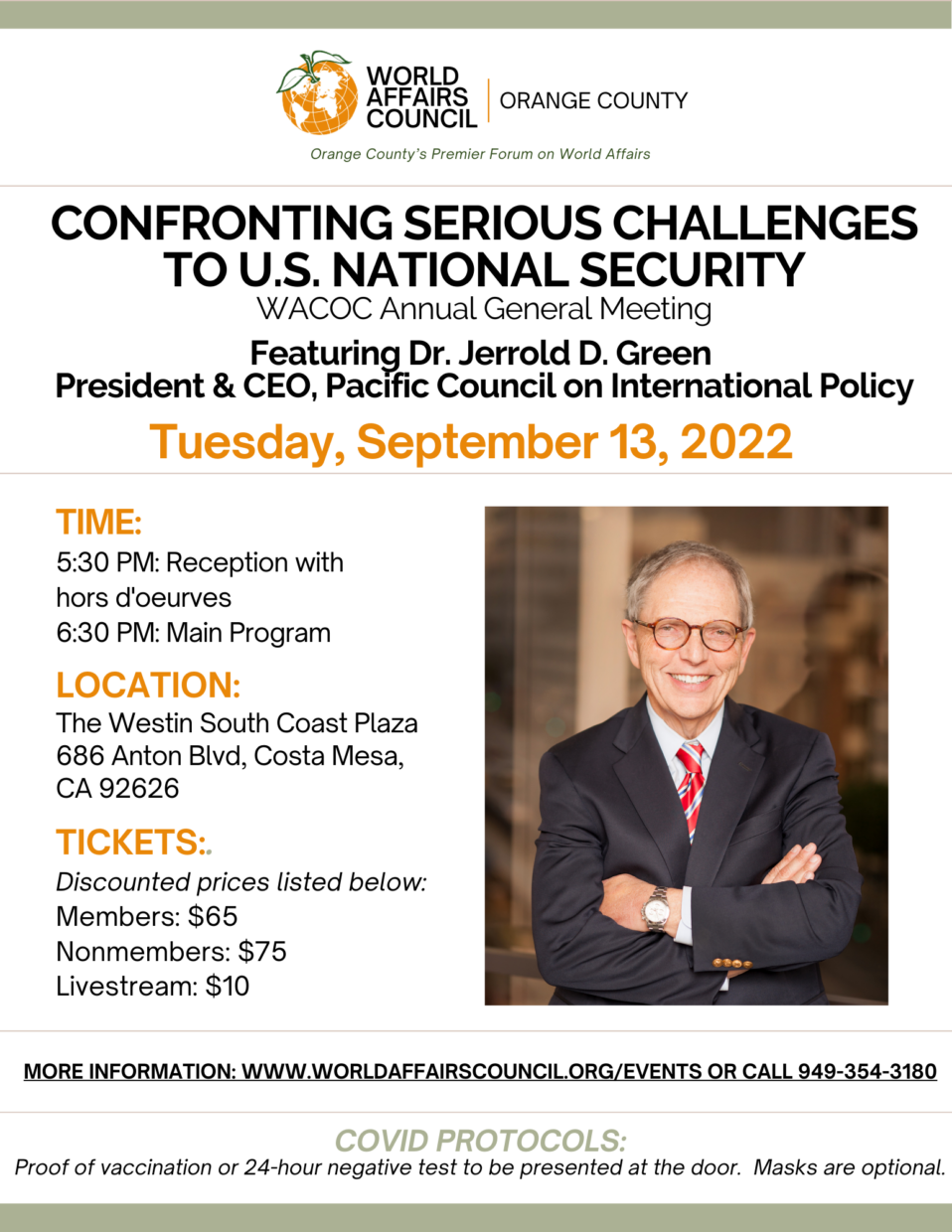 COVID-19 Protocols:
Proof of vaccination or 24-hour test to be provided at the door.

Dr. Jerrold D. Green is the President and Chief Executive Officer of the Pacific Council on International Policy in Los Angeles. He is concurrently a Research Professor at the University of Southern California Annenberg School for Communication and Journalism. Green was previously a Partner at Best Associates in Dallas, Texas, a privately held merchant banking firm with global operations. He also occupied senior management positions at the RAND Corporation where he served as the Director of International Programs and Development and was awarded the RAND Medal for Excellence. Dr. Green has a B.A. (summa cum laude) from the University of Massachusetts/Boston, as well as an M.A. and Ph.D. in Political Science from the University of Chicago. His academic career began at the University of Michigan where he was a professor in the Department of Political Science and the Center for Near Eastern and North African Studies.  He subsequently joined the University of Arizona where he became a Professor of Political Science and Sociology as well as Director of the Center for Middle Eastern Studies.

Green has lived and worked in Egypt, where he was a Fulbright Fellow, Iran, and Israel. He has lectured on six continents and been a visiting fellow at the Chinese Academy of Social Science’s West Asian Studies Center in Beijing; a visiting lecturer at the Havana based Center for African and Middle East Studies (CEAMO), a fellow at the Australian Defense College, and delivered papers at conferences sponsored by the Iranian Institute of International Affairs in Tehran. Dr. Green led three U.S. Department of Defense sponsored Pacific Council delegations to Afghanistan, one to Iraq, and has represented the Pacific Council as an observer at the legal proceedings being conducted at Guantanamo Bay, Cuba, by the U.S. Department of Defense.

Green is a member of the Council on Foreign Relations, the London based International Institute for Strategic Studies, The California Club, the Lincoln Club, the Advisory Board of the Center for Public Diplomacy at the University of Southern California, and the Bill Richardson Center for Diplomacy/FBI Hostage Recovery Fusion Cell Influencers Group. He has served on the Selection Committee for the U.S. Department of State Herbert Salzman Award for Excellence in International Economic Performance by a Foreign Service Officer. Green serves as a member of the Agenda Committee for the annual Halifax International Security Forum where he is an HFX Fellow. Dr. Green has been a Reserve Deputy Sheriff with the Los Angeles Sheriff’s Department for over a decade and was accorded the department’s Meritorious Service Award. He previously served as a Specialist Reserve Officer with the Los Angeles Police Department where he advised on terrorism and intelligence issues.

Green was honored in 2019 by the Los Angeles Area Chamber of Commerce with its World Trade Week Stanley T. Olafson Bronze Plaque Award that honors “a member of the international trade community whose outstanding dedication, efforts and achievements have advanced trade in the Southern California region.”

Dr. Green currently serves as a member of the Global Taiwan Institute Bipartisan Task Force on US-Taiwan Relation in the 21st Century, the Los Angeles Steering Committee of the USA Eisenhower Fellowships, and for over a decade was a member of the selection committee for the Charlotte W. Newcombe Fellowships conferred by the Woodrow Wilson National Fellowship Foundation. He served for 8 years as a member of the United States Secretary of the Navy Advisory Panel where he was awarded the Department of the Navy, Distinguished Civilian Service Award for his service. Green also served multiple terms on the U.S. Department of State Advisory Committee on International Economic Policy (ACIEP), the Board of Directors of the California Club, the Advisory Committee of The Asia Society of Southern California, the Advisory Board of Whitney International University, the Board of Falcon Waterfree Technologies, the Board of Columbia University’s Middle East Institute, and as an International Medical Corps Ambassador. Dr. Green is a technical advisor to Activision Publishing in Santa Monica, California, where he has consulted on the highly successful Call of Duty series.

Your ticket for the: “Confronting Serious Challenges to U.S. National Security”