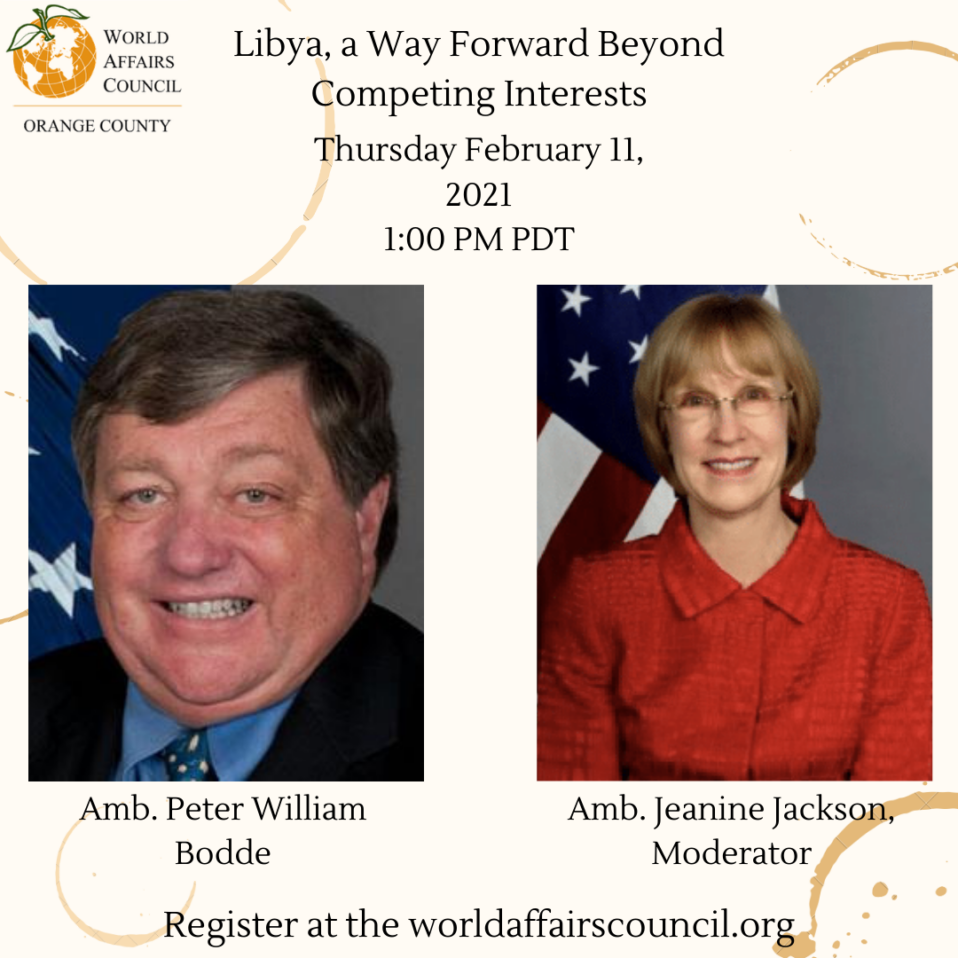 Nine years after the overthrow and killing of Libyan Strongman Muammar Qaddafi, two competing sides struggle in a bloody civil war to control Libya–each backed and armed by powerful regional actors who have staked out vital energy interests for oil and gas in Libya and the adjoining Mediterranean Sea. Turkey supports the UN-backed Government of National Accord with arms and mercenaries; while Russia and the UAE militarily support Khalifa Haftar’s Libyan Arab Armed Forces; a host of other regional countries are closely watching and monitoring this brewing conflict. What are the geopolitical interests at stake? Which nations stand to gain from this conflict? and what is the way forward for the Libyan people?

Peter William Bodde, a career member of the Senior Foreign Service, class of Minister-Counselor, was confirmed by the Senate as the U.S. Ambassador to Libya, serving from 2016 to 2019. He also served as U.S. Ambassador to Nepal from 2012 to September 2015. As such, he received the Secretary’s Distinguished Service Award for his work promoting democracy, protecting U.S. citizens, and helping lead the international response to the April 2015 earthquake in Nepal.

Ambassador Bodde is a strong leader who fosters productive interagency cooperation while maintaining high staff morale. His skills proved invaluable in leading the USG response to the Nepal earthquake. His extensive experience in nascent democracies, especially in South Asia, made him well qualified to serve as the U.S. Ambassador to Libya. He is particularly well regarded for his extraordinary efforts in mentoring his younger colleagues across interagency lines.

Ambassador Bodde earned a B.A. from the University of Maryland in 1976. He has won numerous Department performance awards. He speaks German, Bulgarian, and Nepali.

Jeanine Jackson is a retired Senior Foreign Service Officer and a retired Colonel of the U.S. Army Reserve. She was appointed as U.S. Ambassador to Malawi in 2011 where she led a $250 million development, governance and security assistance program. As U.S. Ambassador to Burkina Faso from 2006-2009 she improved military cooperation and increased infrastructure and development assistance. She also served as a diplomat in Switzerland, Nigeria, Saudi Arabia, Hong Kong, Kenya, Afghanistan and Iraq.

Ambassador Jackson has been a key player in activities related to creating, adapting, rebuilding and reopening U.S. Embassies: As Post Management Officer for the Soviet Union at the time of its dissolution, she managed from Washington and on the ground the establishment of U.S. Embassies in the 13 new countries left in its wake. In Afghanistan in 2001, Ambassador Jackson led the team that reopened the U.S. Embassy and then returned to Kabul in 2002 and served as the Embassy’s Management Counselor until 2003. From Kabul she went to Washington where she was the Department of State’s Management Coordinator responsible for the Inter-Agency effort to reestablish the U.S. Embassy in Baghdad. And as the U.S. military reduced its presence in Iraq in 2010-11, she spearheaded a multi-agency task force that planned and executed transition of support for the U.S. Embassy from Defense to State Department responsibility for which she received the Secretary’s Distinguished Honor Award.

In Hong Kong she established programs to protect the interests of U.S. Government civilian, military, and local employees at the time of the British Colony’s reversion to Chinese sovereignty. In Kenya following the Al Qaeda bombing, she served General Services Officer of the largest Embassy in Africa and was key to reestablishing its operations and infrastructure.

Prior to entering the Foreign Service, Ambassador Jackson worked in Saigon as a civil service employee in the Office of the U.S. Defense Attaché and then served 10 years as an active duty Army officer, primarily in Germany and Korea. She continued her military service for an additional 20 years as a reservist while pursuing her Foreign Service career.

Ambassador Jackson earned a Bachelor’s Degree in Art Education from Hastings College, Nebraska followed by a Master’s Degree in Business Administration. She met her husband Mark when they were both Army Lieutenants serving in Germany. He is a retired colonel of the U.S. Army Reserve and is also a retired member of the Senior Foreign Service. Enamored of Africa’s cultures, they have independently traveled more than 30,000 miles on the continent.

Since retirement, Ambassador Jackson has served as a trainer for the Army’s Mission Command Training Program, providing General Officers, staff and troops the tools and understanding to work effectively with the U.S. Government interagency, international organizations, and multinational allies. Girls education in Africa, music and travel are her other primary avocations. She was born and raised in Sheridan, WY where she and Mark spend summers.

Your ticket for the: February 11th, 2021: “Libya, a Way Forward Beyond Competing Interests”