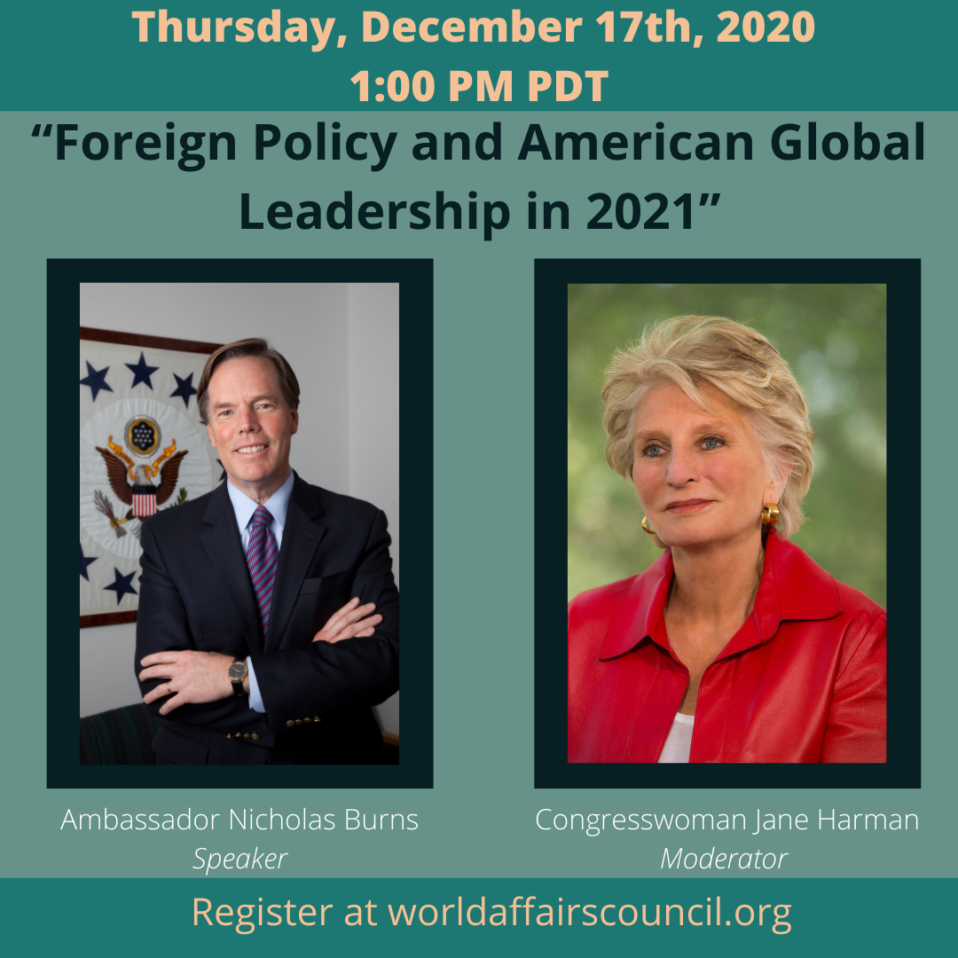 Ambassador Nicholas Burns is the Goodman Professor of the Practice of Diplomacy and International Relations at Harvard Kennedy School. He is Faculty Chair of the Future of Diplomacy Project and also of the Project on Europe and the Transatlantic Relationship at the Kennedy School’s Belfer Center for Science and International Affairs. Burns is Executive Director of the Aspen Strategy Group and the Aspen Security Forum; he is Senior Counselor at The Cohen Group. He is Chairman of the Board of Our Generation Speaks, which seeks to bring together young Palestinians and Israelis in common purpose.

Burns served in the United States government for 27 years as a career Foreign Service Officer. He was Under Secretary of State for Political Affairs (2005-2008), U.S. Ambassador to NATO (2001-2005), U.S. Ambassador to Greece (1997-2001), and State Department Spokesperson (1995-1997). He worked at the National Security Council as Senior Director for Russia, Ukraine and Eurasia Affairs; Special Assistant to President Clinton; and Director for Soviet Affairs for President George H.W. Bush. Burns served in the American Consulate General in Jerusalem where he coordinated U.S. economic assistance to the Palestinian people in the West Bank and before that, at the American embassies in Egypt and Mauritania. He earned a bachelor’s degree in history from Boston College and a master’s degree in international relations from the Johns Hopkins School of Advanced International Studies.

Jane Harman resigned from Congress February 28, 2011 to join the Woodrow Wilson Center as its first female Director, President, and CEO.

Representing the aerospace center of California during nine terms in Congress, she served on all the major security committees: six years on Armed Services, eight years on Intelligence, and eight on Homeland Security. During her long public career, Harman has been recognized as a national expert at the nexus of security and public policy issues, and has received numerous awards for distinguished service.

She serves on the Executive Committee of the Trilateral Commission and the Advisory Board of the Munich Security Conference. She co-chairs the Homeland Security Experts Group with former Homeland Security Secretary Michael Chertoff.

Harman is a Trustee of the Aspen Institute and an Honorary Trustee at the University of Southern California. She serves on the board of Iridium Communication Inc, a NASDAQ traded satellite communications company, and is a member of the Presidential Debates Commission and the Committee for a Responsible Federal Budget.

She has four adult children and eight grandchildren.

Your ticket for the: December 17: “Foreign Policy and American Global Leadership in 2021”