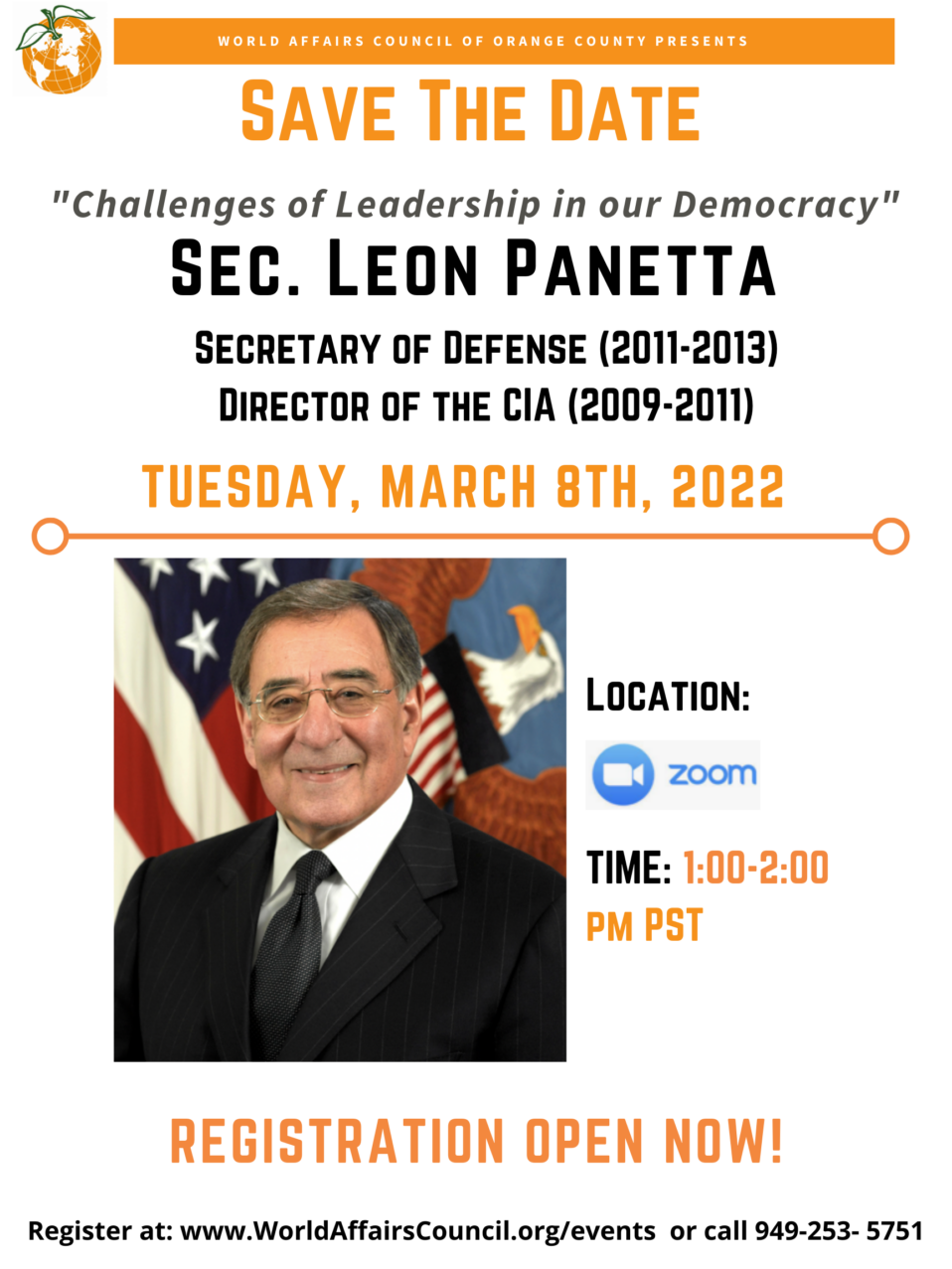 “Challenges of Leadership in Our Democracy”

The son of Italian immigrants, born and raised in Monterey and graduate of Santa Clara University and Santa Clara University School of Law, Secretary Panetta began his long and distinguished public service career in 1964 as a First Lieutenant in the United States Army, and upon discharge went to work in Washington as a legislative assistant to United States Senate Minority Whip Tom Kuchel of California. In 1969, he was appointed director of the Department of Health, Education and Welfare’s Office for Civil Rights, where he was responsible for enforcing equal education laws. Later, he served as executive assistant to the mayor of New York City. He then returned to Monterey, where he practiced law until his election to the United States House of Representatives in 1976.

Serving in Congress for sixteen years, Secretary Panetta was a key participant in agriculture, healthcare, ocean and federal budget issues. From 1989 to 1993, he chaired the House Budget Committee. He authored a wide range of legislation, including the Hunger Prevention Act of 1988, Medicare and Medicaid coverage for hospice care for the terminally ill, and numerous measures to protect the California coast, including creation of the Monterey Bay National Marine Sanctuary.

In 1993, Secretary Panetta left Congress to serve as director of the Office of Management and Budget for the Clinton administration. There, he was instrumental in developing the policies that led to a balanced federal budget and eventual surpluses. In 1994, he accepted appointment as the president’s chief of staff, and immediately brought order and focus to White House operations.

Upon leaving the Clinton administration in 1997, Secretary Panetta joined with his wife Sylvia to establish and co-direct The Panetta Institute for Public Policy, based at California State University, Monterey Bay. Reflecting Secretary Panetta’s own ideals and personal example, the nonpartisan, not-for-profit study center seeks to attract thoughtful men and women to lives of public service and prepare them for the policy challenges of the future.

Returning to public service in the Obama administration as director of the CIA, he ran the operation that brought Osama bin Laden to justice, and, as Secretary of Defense, led the effort to develop a new defense strategy, helped bring two wars to an end, and opened up opportunities for everyone to serve in the military.

Secretary Panetta returned to the Panetta Institute as chairman on February 27, 2013 and resumed his role as moderator of the renowned Leon Panetta Lecture Series. He chronicles his life in public service in his best-selling memoir Worthy Fights, which was published in 2014.

Register for Event: “Challenges of Leadership in Our Democracy” with Former Secretary of Defense Leon Panetta

Your ticket for the: “Challenges of Leadership in Our Democracy” with Former Secretary of Defense Leon Panetta