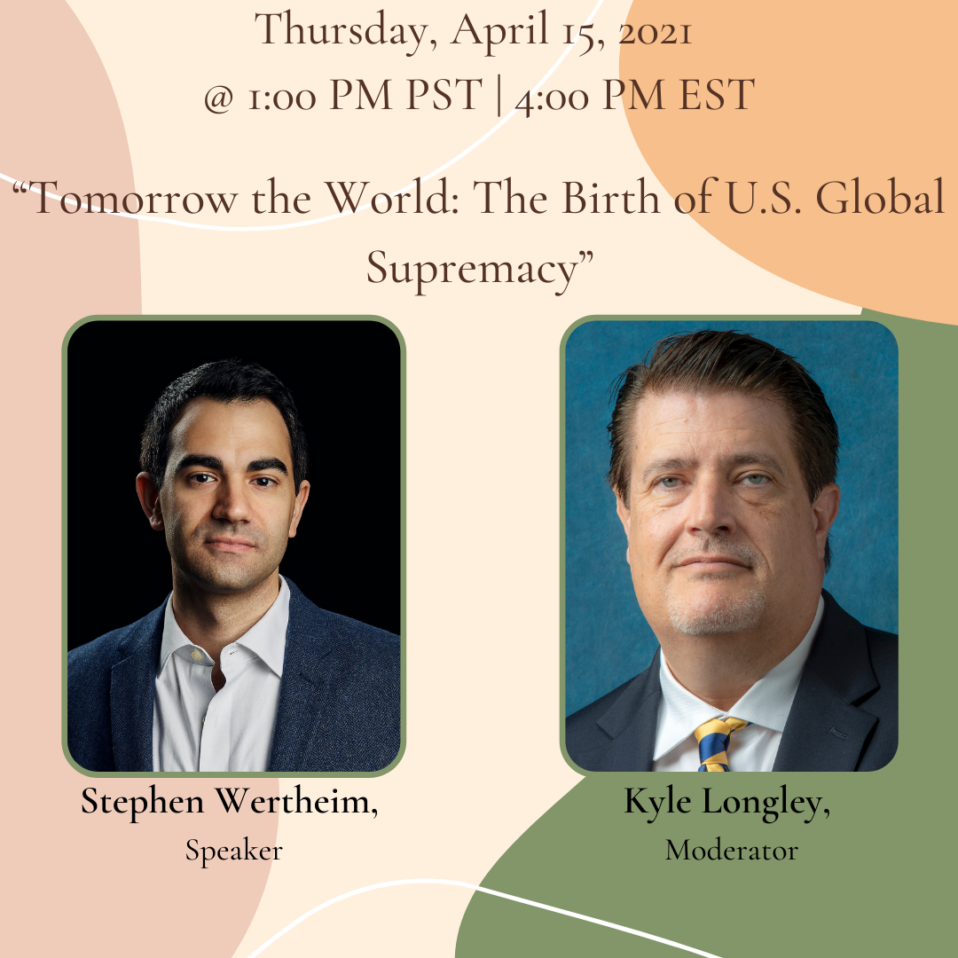 Tomorrow the World: The Birth of U.S. Global Supremacy

A new history explains how and why, as it prepared to enter World War II, the United States decided to lead the postwar world.

For most of its history, the United States avoided making political and military commitments that would entangle it in European-style power politics. Then, suddenly, it conceived a new role for itself as the world’s armed superpower―and never looked back. In Tomorrow, the World, Stephen Wertheim traces America’s transformation to the crucible of World War II, especially in the months prior to the attack on Pearl Harbor. As the Nazis conquered France, the architects of the nation’s new foreign policy came to believe that the United States ought to achieve primacy in international affairs forevermore.

Scholars have struggled to explain the decision to pursue global supremacy. Some deny that American elites made a willing choice, casting the United States as a reluctant power that sloughed off “isolationism” only after all potential competitors lay in ruins. Others contend that the United States had always coveted global dominance and realized its ambition at the first opportunity. Both views are wrong. As late as 1940, the small coterie of officials and experts who composed the U.S. foreign policy class either wanted British preeminence in global affairs to continue or hoped that no power would dominate. The war, however, swept away their assumptions, leading them to conclude that the United States should extend its form of law and order across the globe and back it at gunpoint. Wertheim argues that no one favored “isolationism”―a term introduced by advocates of armed supremacy in order to turn their own cause into the definition of a new “internationalism.”

We now live, Wertheim warns, in the world that these men created. A sophisticated and impassioned narrative that questions the wisdom of U.S. supremacy, Tomorrow, the World reveals the intellectual path that brought us to today’s global entanglements and endless wars.

Stephen Wertheim is a historian of the United States in the world. He directs grand strategy at the Quincy Institute for Responsible Statecraft, which he co-founded with a mission to move U.S. foreign policy away from endless war and toward vigorous diplomacy in the pursuit of peace.

He is author of Tomorrow, the World: The Birth of U.S. Global Supremacy (Harvard University Press, 2020) and academic articles on such topics as U.S.strategy, international law, world organization, and humanitarian intervention.

Wertheim regularly writes about current events in Foreign Affairs, the New York Review of Books, the New York Times, the Washington Post, and elsewhere. Prospect magazine named him one of “the world’s 50 top thinkers for the Covid-19 age.”

He previously held faculty positions at Columbia University and Birkbeck, University of London. He received a PhD in History from Columbia in 2015.