POSTPONED: “An Intelligence Officer’s View of the World” with Former Acting Director of the CIA Michael Morell 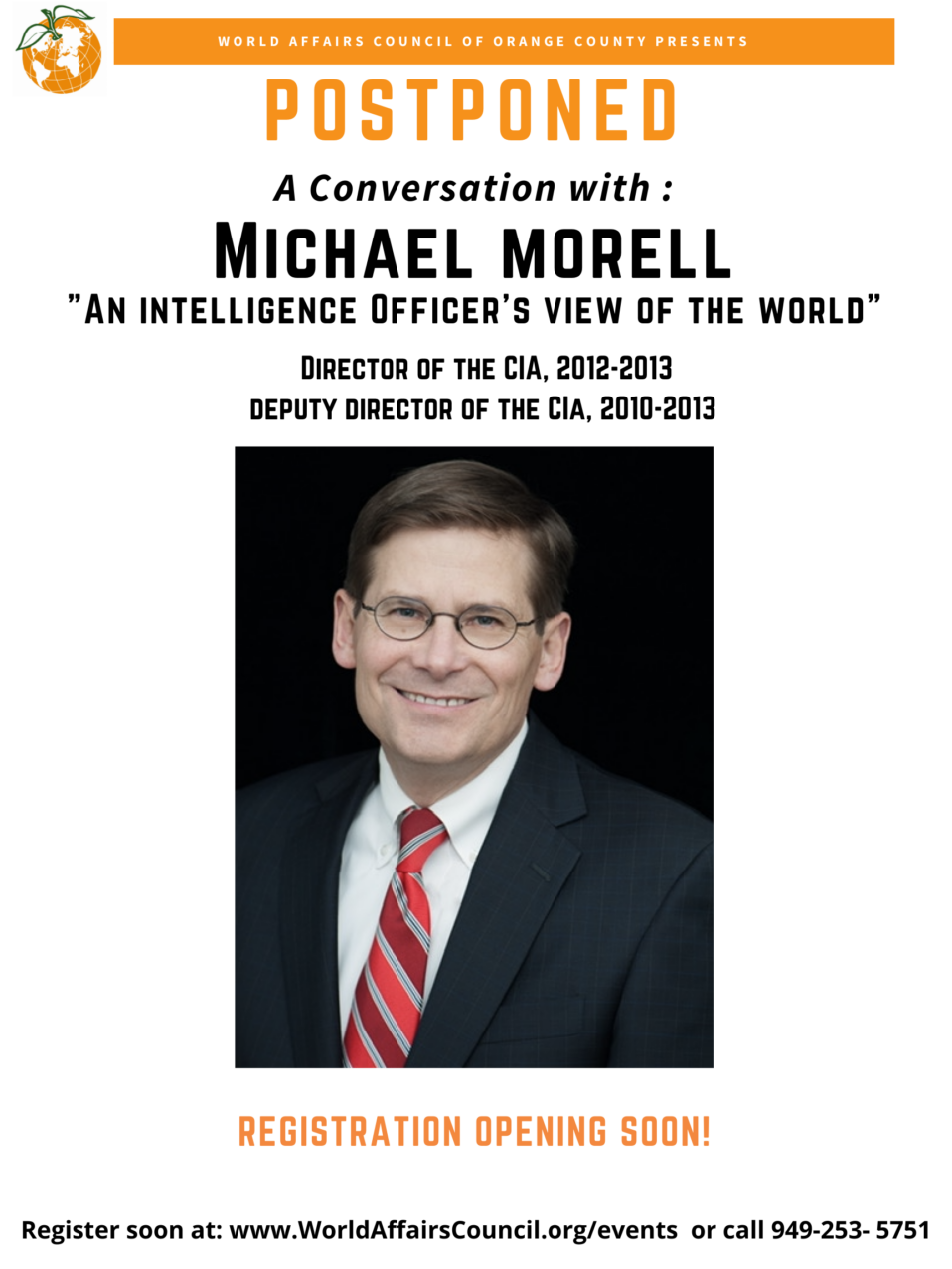 POSTPONED
Due to unforeseen technical circumstances affecting our keynote speaker, we have had to postpone this webinar. We will be rescheduling with a new date very soon. Your registeration and credit will be transferred onto the new webinar’s date. We are very sorry for any inconvenience that this may cause. Please contact us with any questions or concerns.

“An Intelligence Officer’s View of the World”

Please note that due to COVID-19 concerns, the World Affairs Council of Orange County will be requiring proof of vaccination or a 24-hour negative test to be presented at the door. We appreciate your cooperation.

Michael Morell, the former Acting Director and Deputy Director of the Central Intelligence Agency, is one of our nation’s leading national security professionals, with extensive experience in intelligence and foreign policy. He has been at the center of our nation’s fight against terrorism, its work to prevent the proliferation of weapons of mass destruction, and its efforts to respond to trends that are altering the international landscape—including the rise of China, a revanchist Russia, and the cyber threat. Politico has called Michael the “Bob Gates of his generation.”

During his 33-year career at CIA, Michael served as Deputy Director for three-and-a-half years, a job in which he managed the Agency’s day-to-day operations and analysis, represented the Agency at the White House and Congress, and maintained the Agency’s relationships with intelligence services and foreign leaders around the world. Michael also served twice as Acting Director, leading CIA when Leon Panetta was confirmed as Secretary of Defense and again after David Petraeus left government.

Michael’s senior assignments at CIA also included serving for two years as the Director of Intelligence, the Agency’s top analyst, and for two years as Executive Director, the CIA’s top administrator—managing human resources, the budget, security, and information technology for an agency the size of a Fortune 200 firm.

Michael has been a witness to history on multiple occasions. He is the only person who was both with President Bush on September 11th, when al-Qaida burst into the American consciousness, and with President Obama on May 1st, when Bin Laden was brought to justice. Michael played a major role in the Bin Laden operation.

Michael was known inside the CIA for his leadership. He inspired individuals and work units to perform beyond expectations. He mentored many Agency officers into the senior leadership ranks, including a significant number of women and minorities. When he departed the CIA, thousands of officers wrote Michael notes of thanks.

Michael served as a member of President Obama’s 2013 Review Group on Intelligence and Communications Technology and as a member of the 2018 Commission on the National Defense Strategy, a commission appointed by Congress to help it understand the nation’s defense needs.

Michael is a member of the Council on Foreign Relations and the American Economic Association.

Michael is the author of the New York Times bestseller on CIA’s nearly 20-year fight against al Qa`ida. The title of the book is “The Great War of Our Time: An Insider’s Account of the CIA’s Fight Against Terrorism – From al Qaida to ISIS.” It was published in May 2015.

Michael is involved with a number of charities. He serves on the Honorary Board of Directors at the International Spy Museum. Michael served on the Board of the CIA Officers Memorial Fund and on the Board of the National Intelligence University Foundation. He and his wife Mary Beth are fully committed to the class they sponsor at a DC Charter School.

Register for Event: POSTPONED: “An Intelligence Officer’s View of the World” with Former Acting Director of the CIA Michael Morell

Your ticket for the: POSTPONED: “An Intelligence Officer’s View of the World” with Former Acting Director of the CIA Michael Morell

POSTPONED: “An Intelligence Officer’s View of the World” with Former Acting Director of the CIA Michael Morell